Although the book is called Miriam the Medium, Shapiro says that she, like Miriam, is just a “regular psychic” who gathers information through all senses, in addition to working as a medium, who only speaks with the spirit world. 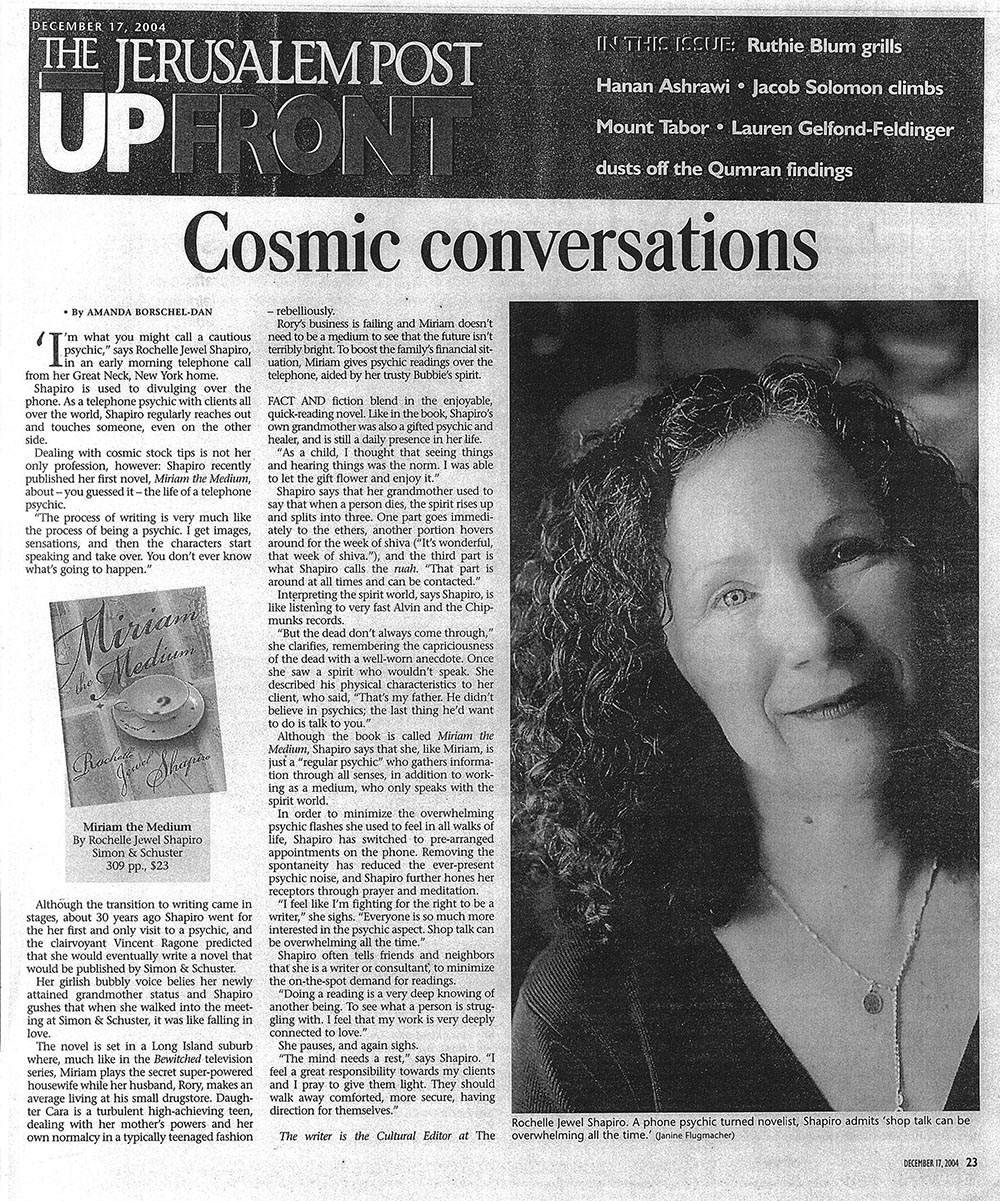 The writer is the Cultural Editor at The Jerusalem Post.

‘I’m what you might call a cautious psychic,” says Rochelle Jewel Shapiro, in an early morning telephone call from her Great Neck, New York home.

Shapiro is used to divulging over the phone. As a telephone psychic with clients all over the world, Shapiro regularly reaches out and touches someone, even on the other side.

Dealing with cosmic stock tips is not her only profession, however: Shapiro recently published her first novel, Miriam the Medium, about – you guessed it – the life of a telephone psychic.

“The process of writing is very much like the process of being a psychic. I get images, sensations, and then the characters start speaking and take over. You don’t ever know what’s going to happen.”

Although the transition to writing came in stages, about 30 years ago Shapiro went for the her first and only visit to a psychic, and the clairvoyant Vincent Ragone predicted that she would eventually write a novel that would be published by Simon & Schuster.

Her girlish bubbly voice belies her newly attained grandmother status and Shapiro gushes that when she walked into the meeting at Simon & Schuster, it was like falling in love.

The novel is set in a Long Island suburb where, much like in the Bewitched television series, Miriam plays the secret super-powered housewife while her husband, Rory, makes an average living at his small drugstore. Daughter Cara is a turbulent high-achieving teen, dealing with her mother’s powers and her own normalcy in a typically teenaged fashion – rebelliously.

Rory’s business is failing and Miriam doesn’t need to be a medium to see that the future isn’t terribly bright. To boost the family’s financial situation, Miriam gives psychic readings over the telephone, aided by her trusty Bubbie’s spirit.

FACT AND fiction blend in the enjoyable, quick-reading novel. Like in the book, Shapiro’s own grandmother was also a gifted psychic and healer, and is still a daily presence in her life.

“As a child, I thought that seeing things and hearing things was the norm. I was able to let the gift flower and enjoy it.”

Shapiro says that her grandmother used to say that when a person dies, the spirit rises up and splits into three. One part goes immediately to the ethers, another portion hovers around for the week of shiva (“It’s wonderful, that week of shiva .”), and the third part is what Shapiro calls the ruah . (“That part is around at all times and can be contacted.”)

Interpreting the spirit world, says Shapiro, is like listening to very fast Alvin and the Chipmunks records.

“But the dead don’t always come through,” she clarifies, remembering the capriciousness of the dead with a well-worn anecdote. Once she saw a spirit who wouldn’t speak. She described his physical characteristics to her client, who said, “That’s my father. He didn’t believe in psychics; the last thing he’d want to do is talk to you.”

Although the book is called Miriam the Medium, Shapiro says that she, like Miriam, is just a “regular psychic” who gathers information through all senses, in addition to working as a medium, who only speaks with the spirit world.

In order to minimize the overwhelming psychic flashes she used to feel in all walks of life, Shapiro has switched to pre-arranged appointments on the phone. Removing the spontaneity has reduced the ever-present psychic noise, and Shapiro further hones her receptors through prayer and meditation.

“I feel like I’m fighting for the right to be a writer,” she sighs. “Everyone is so much more interested in the psychic aspect. Shop talk can be overwhelming all the time.”

Shapiro often tells friends and neighbors that she is a writer or consultant, to minimize the on-the-spot demand for readings.

“Doing a reading is a very deep knowing of another being. To see what a person is struggling with. I feel that my work is very deeply connected to love.”

She pauses, and again sighs.

“The mind needs a rest,” says Shapiro. “I feel a great responsibility towards my clients and I pray to give them light. They should walk away comforted, more secure, having direction for themselves.”

The writer is the Cultural Editor at The Jerusalem Post.
Miriam the Medium By Rochelle Jewel Shapiro. Simon & Schuster 309 pp., $23