You Were Meant For Me, Yona Zeldis McDonough’s newest novel 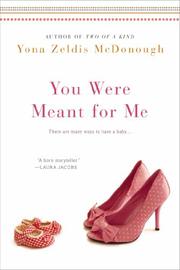 YOU WERE MEANT FOR ME, Yona Zeldis McDonoughPublsher: NAL Accent (Penguin Group)

Yona Zeldis McDonough, author of Two of a Kind and A Wedding in Great Neck, latest heroine, Miranda, a thirty-five year old food editor at Domestic Goddess who is single, barely recovering from a breakup, finds an abandoned newborn in a Brooklyn subway station. After bringing her to a police station, Miranda finds that she can’t stop thinking about the baby and is desperate to adopt her, and actually gets the chance. Through happenstance, which turns out to be not entirely coincidental, the biological father steps forth, and there’s plenty of heartbreak all around until….

McDonnough sets the tone of the book while Miranda reads Tennessee Williams’ Cat on a Hot Tin Roof because her friend, Bea, is currently playing in an out-of-town. “Maggie was the Williams character she (Miranda) liked best. Unlike Blanche or Laura—fragile and broken creatures—Maggie was scrappy, a fighter and survivor,” and that nails Miranda and her fierce mother-love for the baby, Celeste, a.k.a. Lily (the father’s name for her) and Miranda’s struggle to do what’s best for her. And the tone is set as Miranda reads the opening dialogue for the tragic play and thinks, Williams can be so funny. And so can McDonnough!

Although You Were Meant For Me is written with a light hand, a slight of hand in its magical quality, it’s a strong piece of social satire. Miranda’s friend, Courtney, has become a Bridezilla. Since getting engaged to a Harvard lawyer, she just can’t stop dropping the “H” bomb. When Courtney waxed on about getting married at the Botanical Gardens where there were such beautiful trees, Miranda says, slyly, “I’ve seen them.” So many moments of wry chuckles and hilarity, but don’t discount the seriousness of this book!

Not only is the storyline tragic—finding love, losing it, and mother love the most painful of all, but McDonnough casts such a wide net that if I were making up tag lines for a blog post, I’d have to include race issues (Celeste and the birthfather, Jared, are black), singlehood, single parenting, marriage, infidelity, senility, death, lust, longing, foodies, photography, romance, urban planning, mental illness….

And how rare is it to find characters who live on the page and draw you into their lives? Not one, not two, but all of the characters! McDonough has a knack for showing you the upside and downside of each character. Whether she’s writing about a man or woman, their inner thoughts and whatever they say and do feels real, justified. Also, one of Miranda’s love interests , Evan, is a photographer who loves old, non-digital cameras. McDonnough doesn’t just have him walking about with a camera around his neck snapping pictures. You go with him into his darkroom and watch him develop photos. The way Miranda, an editor at Domestic Diva, prepares food, has an eye for it, you salivate.