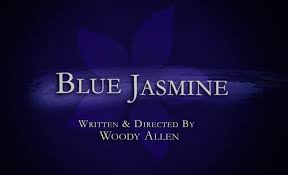 For awhile BLUE JASMINE was so close to Tennessee Williams’ A STREETCAR NAMED DESIRE, that I was nervous that Jasmine, played by Cate Blanchett, would run roughshod over Blanche Du bois, one of my favorite literary characters. But as the plot takes on circumstances of its own, I was able to relax and get inside it. But it did strike me as unbelievable that Jasmine would have to spend so much time learning to use a computer to make a living after her husband (Alec Baldwin) a la Medoff, was caught making off with everyone’s loot. No socialite could plan a gala without Excel. Ginger, Jasmine’s sister, was more working class than Williams’ Stella, but her boyfriend, played by Bobby Canavale (remember him naked and getting hung–I didn’t say well-hung–in Broadway Empire?) wears a wife-beater, but doesn’t shout out “Gingerrrrr!” And Andrew Dice Clay who lost his popularity as a comic because he cried on the Arsenio Hall Show played Ginger’s first husband. With this role, he’s earned new chops for himself as an actor and may be nominated for an academy award. Who is crying now?