Why Seattle Homecoming Prince Jaylen Fryberg might have killed his classmantes

Reading New York Times columnist’s Charles M. Blow‘s brilliant literary memoir, Fire Shut Up In My Bones (Houghton, Mifflin, Harcourt, 2014) which is filled with personal experience of living through rural poverty, sexual betrayal, and all manner of hardships he’s overcome,  I came upon an insight that answered my question–why would a popular, beloved kid like freshman homecoming prince of Marysville Puck Hight School, Jaylen Fryberg, have shot  five classmates, killing one, because he was thrown over by girlfriend Zoe Gallasso in favor of his cousin, Andrew?

Charles Blow explained it to me on p. 103 Fire Shut Up In My Bones. “I also learned something about popular children that I had never known,” Blow writes, “because I’d never been popular myself: they are never quite comfortable because they’re always exhausted. Staying on top is harder than getting there. They’re racked with insecurities. They know that their perch isn’t necessarily permanent. There is always someone waiting and wanting to snatch the crown, always someone willing to betray you in order to be you. The people at your side aren’t necessarily on your side.”

Jaylen’s last tweet: “It won’t last…. It’ll never last….” was probably more about his own stature as the most popular boy in grade rather than his cousin and Zoe’s romance.

Fire Shut Up in My Bones is a memoir that goes beyond itself, teaching you not just about Charles Blow’s world each of  our own. 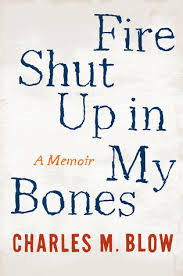