Who’s Afraid of Virginia Woolf at the Booth Theater 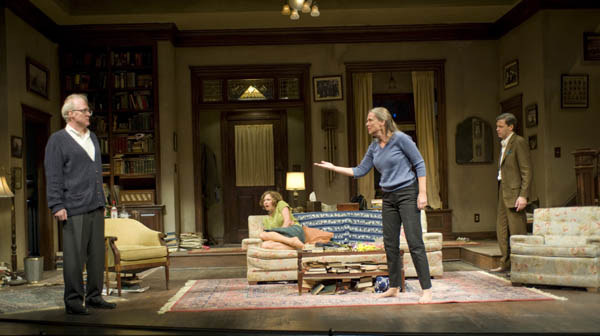 AT THE BOOTH THEATRE

What a pleasure to have a truly revival-worthy play on Broadway for a change! Three acts, two intermissions. Did the play feel long? There were no loud yawns, hardly any fidgeting, and nobody held a private discussion (at least within my earshot). And not one audience member took out their phone to text. Really, how could you when the request not to was in the voice of the great Edward Albee himself?

Directed by Tony Award nominee Pam MacKinnon (Clybourne Park), the production features the original Steppenwolf cast led by Tracy Letts (his performance builds to a crescendo) and Amy Morton, the playwright and the star of the Pulitzer and Tony Award-winning smash hit August: Osage County.

George and Martha know how to stage a hilarious and deadly battle. Alcoholism, sadism, masochism, and probably isms I’ve never heard of are bared like their teeth. Carrie Coon and in his Broadway debut, Madison Dirks, play the innocent geese who get invited to George and Martha’s shooting range for an all-nighter of booze, confessions, and betrayals. Carrie and Madison gave stellar performances. If you see it, notice Dick’s postures—the way his chin juts in anger or anxiety, the way he winces at unbearable revelations, and how he tries to stand his ground with his legs apart, hands on hips. Even if he didn’t say a word, you’d get what he’s trying to deliver.