VILNA, now at the THEATER OF ST. CLEMENT’S

IRA FUCHS must have been called by the voices of the dead to write his impassioned play, Vilna. In 1974, after college graduation, he wrote a few plays. One was put on at the YWHA on Eighth Avenue, the other at Playwright Horizons. Then he left the theater to become a successful tech entrepreneur and wrote a couple of books in his field. After forty-five years, he was moved to take a six-week college class in playwrighting. The Assignment: write a full-length play. He read a report of an escape tunnel at the site of the Vilna ghetto and by the end of the class his  masterpiece, Vilna, was born.

Since the tenth century, the city of Vilnius was the hub of Jewish learning. “The Jerusalem of the North,” Napoleon called it. Fuchs tells the heroic tale of Motke Zeidel and Yudi Farber from the ages of 11 through 28, actual people who grew up in Vilna. Through them, we see Vilna, a city of culture that had been degraded by the annexation at various times by Poland, Russia, and Lithuania changed during WWII into a ghetto where Jews were forced to subsist. Then came Hitler’s order to take the Jews, Soviet prisoners of war, and anyone hostile to the Nazi regime to Ponar Forest, once a site of celebration, shoot them, and bury them. From June 1941 to July 1944, over 75,000 people, most of them Jews, were murdered in this horrifying killing pit. All the while, we see the painful moral choices Motke and Yudi had to make in order to save as many people as possible.

Before our eyes, SEAN HUDDUCK (Motke) and SEAMUS MULCAHY (Yudi Farber) transform themselves from 11-year-olds through their bar mitzvahs and onward to young manhood. Not brothers by birth, they are opposites of each other in every way. What links them is their love for each other and for their people as they each try to undermine Nazi plans to exterminate all the Jews. Yudi, an engineer, masterminds the plan to dig the tunnel to save themselves and as many others as possible. Motke helps him in the excruciating task of lying on his stomach, passing handfuls of earth to Yudi who is also prone. Then Yudi must sidle away to disperse it so no one detects their plan. 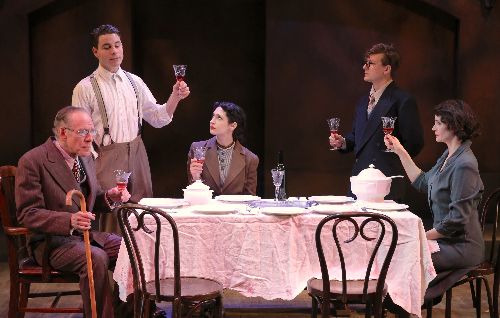 JACOBY, a glove manufacturer crippled after an anti-Semitic attack, is the poignant voice of wisdom and conscience, and also the ghost of Motke who narrates at the beginning and the end of the play. The drama is upped when you realize that Motke’s father, because of his injuries, will be one of the Jews most at risk for eradication by the Nazis. PAUL COOPER gives a bone-chilling performance as the sadistic Nazi Bruno Kittle who loves to degrade, murder, and torture because “he’s good at it.” SOPHIA BLUM, BRIAN CADE, NATHAN KAUFMAN, TOM MORIN, JAMES MICHAEL REILLY, PATRICK TOON, and CAREY VAN DRIEST appear brilliantly in sometimes more than one role.

Brittany Vasta’s minimal two-level scenic design in earthy tones and the few pieces of moveable furniture make smooth transitions into different scenes and time periods. Loved the chandelier that swirled down over the dining room table and all the other lighting design by Harry Feiner. The costumes and uniforms by Devon Painter and the sound design by Jane Shaw, also made you feel as if you were right there.

This is a play that not only needed to be written, but also needs to be seen. A recent survey showed that 41% of millennials, and nearly one-third of all Americans believe that 2 million or fewer Jews were killed in the Holocaust instead of the actual number—six million. And although there were over 40,000 camps and ghettos in Europe during the Holocaust, 66% of millennials didn’t know what Auschwitz was. Some people didn’t even know what the Holocaust was. At the beginning and the end of the play, Motke’s ghost, gives a heart-seizing warning that things that happened in Vilna could happen anywhere at any time.