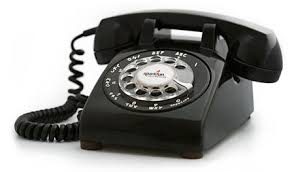 The buzzing drowned out the voices. I bought a new phone. Still it buzzed. I called Verizon. They sent out a repairman. Thought myself lucky that I pay that extra bill for home repair.

“It’s the copper wire,” he said. “We can’t fix it. We’re not using it anymore. You have to migrate over to fiber optic.”

After he left, there were still noises on my line. More like a low woo woo than a buzz. Another repairman came. He couldn’t do a thing. “I’m a copper guy,” he explained. “You have fios.” (That’s the name for fiber optics.) I told him it was changed as he could see for himself by the battery instead of the old system. He put in an order to show Verizon that I have fios now.

That was days ago. When I call service, they still only have me as copper. “You haven’t migrated over yet,” they explain.

“Well, how did that happen? Who can straighten this out?”

I’m transferred from copper to fios to customer service and all agree, “You haven’t migrated over yet!”