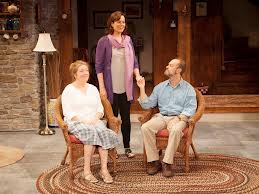 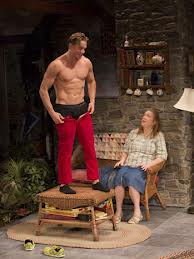 What a treat you’re in for with Christopher Durang’s new comedyVanya and Sonia and Masha and Spike. This 17 week premiere Broadway engagement at the Golden Theatre is directed by Nicholas Martin. The stars are Sigourney Weaver, David Hyde Pierce, Kristine Nielsen, Shalita Grant, Genevieve Angelson and Billy Magnussen.

Durang played off Chekov’s works to create this hilarious modern work that becomes a heartfelt cry for the past. Kristine Nielson looks out fondly at the cherry orchard while the rest of the family argues that ten cherry trees do not constitute an orchard. And a heron stands in for the Chekov’s seagull. Oh, and Greek tragedy isn’t off limits. There is Cassandra, (Shalita Grant), the psychic cleaning lady who is always warning the family, and doesn’t mind using a bit of voodoo to get her “pin points” across.

Vanya (Pierce) and his adopted sister, Sonia (Nielsen), sacrificed their lives to care for the aging parents who had dementia and stayed on in their childhood home in Bucks County, PA. without prospects. Their lives would seem to unfold the way it has always been—Sonia bewailing her fate, Vanya acting calm, but patronizing, and maddeningly, but subtly hostile toward her. Enter the sister, Masha,(Weaver), a famous movie star who returns to sell the family home out from under her hapless siblings. Besides flaunting her achievements, she brings a stud muffin, Spike (Billy Magnussen,) to show off her wildly funny sexcapades as well.

Tickets for Vanya and Sonia and Masha and Spike can be purchased in person at the Golden Theatre Box Office (252 West 45th Street, between 7th and 8th Avenues) or via telecharge.com/ (212) 239-6200. Tickets are priced from $60.00 to $130.00. For Group Bookings visit www.telecharge.com/groups or call Telecharge Group Sales at 800-432-7780. A number of $37 “Rush Tickets” will be made available for each performance for patrons aged thirty-five and younger. These tickets must be purchased day-of, in-person at the box office and are subject to availability. Valid photo I.D. will be required, and patrons are limited to two rush tickets per performance.