UNLOCK’D, A NEW MUSICAL COMEDY, now playing at THE DUKE

Performances have been extended to July 20th. 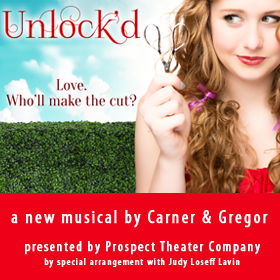 “Charming!” was what the audience members said with big smiles as they left the two hour performance of Unlock’d, the Richard Rodgers Award-winning new musical comedy. with book and lyrics by Sam Carner and Derek Gregor—”Best of Fest” Winner in the New York Musical Theatre Festival (2007).

Although laced with crack-up wit and silliness, Unlock’d does have deep themes. Brainy Clarissa (Jennifer Blood), is tired of being invisible to the world while her sister, Belinda (Jillian Gottlieb)  a beauty who is expert at babbling nonsense, is the most doted-on woman in 18th Century England. To even the odds of Clarissa ever being able to attract a man, she decides to cut a lock of Belinda’s glorious hair. Meanwhile, the handsome Baron Shearling (Sydney James Harcourt) just home from war, has the same idea because cutting Belinda’s hair is also the only way to win her. The Baron’s brother, Edwin, (A.J. Shively) a man devoted to books and the life of the mind, is in the same position with his brother as Clarissa is to her Belinda. He ends up falling in love with Belinda. With the help of the sylphs and the gnomes, the star-crossed lovers find their way to their perfect loves and their true identities.

The staging is imaginative, enhancing the eavesdropping and quick slip-aways featured in the plot which is a fun melange of Shakespearean comedy, fairy tale, and mythology. (Zeus makes an appearance.) And the music…ahh the music…an innovative scare backed up by an electric guitar, harpsichord, and strings. The songs, A Delicate Thing and By the Light of Your Love, are downloaded inside me.

In his bio, Sydney James Harcourt writes, “Walk into the dream awake.” That’s my advice for going to see Unlock’d.