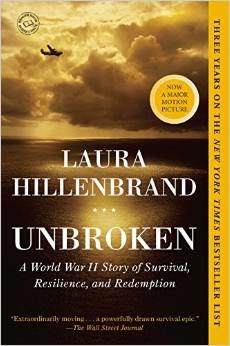 Just as she did in Seabiscuit, the story of a Depression era runt-sized racehorse that ended up a winner and lifted the spirits of the team and of the nation, Laura Hillenbrand, suffering from two crippling auto-immune disorders, hitched her star to another unlikely winner, runt-sized, delinquent, erratic Louis Zamperini who managed to survive grueling horrors when his Army Air Force bomber crashed in the Pacific during WW ll and he ended up in one of the notoriously brutal, Isis-like Japanese POW camps. Hillenbrand found a tiny article with Zamperini’s story on the back of an article she was reading and pow, she knew she had to write his biography.  Most of the interviews took place on the phone, but ninety year-old Zamperini did take a plane to visit Hillenbrand once since she was too ill to make the trip to see him.

The amount of detail remembered by Zamperini is astonishing. Who knew that soldiers drowned because other soldiers used the air filling life vests to carbonate their drinks? He was full of high jinx and had an eye for what to write in his diary, like the time he got into horseplay with a friend and they managed to tumble through three partitions that separated soldiers’ quarters. My aunt had sent me my uncle’s World War ll diary, which I thought would be about his battles in Iwo Jima.  Instead my uncle had written what he ate everyday. The two interesting lines it it were, “The native girls go barefoot. Some of the guys claim they had sex with them, but I don’t know about that.”

“Zamperini must have had something to do with this,” the commanding officer mutters.

But how it’s told, the poetry of it, comes straight from Hillenbrand as in this image: “A brow of fog hung 200 feet over the ocean.”

I chose not to see Unbroken, the movie. Unbroken, the biography, was written so cinematically that I knew no movie could ever compete.