TUCK EVERLASTING: the Musical at the Broadhurst Theatre

TUCK EVERLASTING, the children’s classic by Natalie Babbitt, is now a musical with a score by songwriters Chris Miller (music) and Nathan Tysen (lyrics) and a book by Tony Award-nominated playwright Claudia Shear ( Dirty Blonde) and Tim Federle (NYT Notable Novel: Better Than Nate). The songwriters are the recipients of the 2014 Fred Ebb Award. The director/choreographer is Tony Award-winning Casey Nicholaw (Alladin, Something’s Rotten, The Book of Mormon.)

When my daughter was assigned Tuck Everlasting in fifth grade, she cried so hard that I had to read it along with her to give her support. The Tuck family accidentally drink magic spring water that gives them the gift and the curse of immortality. My daughter was just the age of ten-year-old Winnie Foster (Sarah Charles Lewis) who bridles against the over-protectiveness of her mother (Valerie Wright, veteran of eight Broadway shows) and her nana (Pippa Peartree of Noises Off, You Can’t Take It With You) and runs off into the forbidden woods. There she meets 17-year-old devil-may-care Jesse Tuck (Andrew Keenan-Bolger of Newsies, Mary Poppins, Seusical). He brings her home to meet his father Angus (Michael Park of Cat on a Hot Tin Roof, Carousel) and his mother Mae Tuck (Carolee Carmello of Finding Neverland, Scandalous) and his brother, Miles (Robert Lenzi of South Pacific). Soon the Tucks’ secret is found out. Jesse is really 104, for one. Although Winnie can be trusted, the Tuck secret, the villainous Man in the Yellow Suit (Terrance Mann of Pippin, Beauty and the Beast) wants to sell the spring water and use it to gain immortality for himself and power over others. The Tucks have to run off again and Winnie is left with a choice—to drink the water when she’s seventeen so that Jesse can come back and marry her, and they can travel the world together, never setting up roots, or grow old and live in the world as nature intended.

There are no spoilers here. As in opera, it’s better to know the story beforehand as many in the theater did. This is a show you can take your kids to, and assure that Tuck remains everlasting.

One of my favorite songs was performed by the witless town constable (Fred Applegate of Wicked) and his assistant, Hugo (Michael Wartella, also in Wicked) who go off on a bumbling search for Winnie.

The ballet at the end is the showstopper for me. Take out your Kleenex. It’s a magnificent weeper.

In person, Go to Box Office at
Broadhurst Theater

(Between Broadway and 8th Avenue) 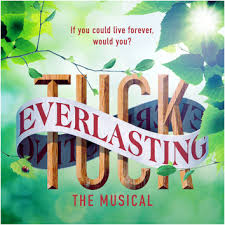