TRIP OF LOVE now at Stage 42 at the Shubert Theater 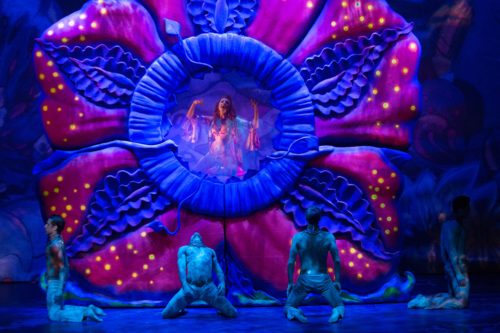 Stage 42 at The Little Shubert Theater (422 West 42nd St) envelops you in a psychedelic setting that readies you for this Sixties dance musical spectacle, TRIP OF LOVE.

“I’ve seen this show ten times,” the woman next to me confided before the curtain went up.

“The music, oh, this music brings me back to Woodstock, to my youth,” she said, and hand-jived through the performance. It wasn’t just folks her age that caught the beat. Young people were bopping to the music, the seats rocking. Who could stay still during Wipe Out, Born to Be Wild, These Boots Were Made for Walking, and dah-dah-dah-dah, Batman?

There were heart-tugging moments for me. It was as if Sandra Dee was alive and young again when KELLY FELTHOUS sang Where the Boys Are. And TARA PALSHA did a passionate rendition of the first feminist song about relationships that I’d ever heard–You Don’t Own Me. The scene of soldiers in Vietnam (AUSTIN MILLER, DAVID ELDER, JOEY CALVERI) singing Blowin’ in the Wind made me, as my grandma would have said, verklempt. (Choked up, Yiddish-style). The question, “How many deaths will it take till we know that too many people have died?” is one that we, unfortunately, continue to ask.