This Is Our Youth at the Cort Theater

Steppenwolf‘s revival of Kenneth Lonergan‘s 1996 play, This is Our Youth, about rich alienated kids during the Reagan era stars the lovable, goofy Michael Cera (Juno,  Superbad, Youth in Revolt, Arrested Development) as Warren Straub, the charismatic Kieran Culkan (The Starry Messenger, After Ashley, SuBurbia, The Moment When) as Dennis Ziegler, and the gifted, adorable, eighteen-year-old Tavi Gevinson (Enough Said, Parenthood, and editor-in-chief of Rookie) as Jessica Goldbaum. Movement keeps your attention and these characters throw themselves across the stage and the absolutely hilarious dance between galumphing Warren and sprightly Jessica will hold yours. Who knew there was such a position as fight choreographer? Well, Thoma Schall has been helping stage violence for years in such productions as Of Mice and Men, Romeo and Juliet, and The Country House). Since the play is talky, more character study than plot, the leaps into bed, the leaps onto tabletops, and the dancing was a terrific idea! Director Anna Shapiro (Of Mice and Men, Mother**ucker With the Hat, Domesticated) had gold with these actors native talents and she certainly helped them shine.

Kids like this brilliant trio still exist–the ones whose parents have made it with a capital M, but lost interest in their marriages, their post-adolescent kids, and set them adrift in daddy-paid-for apartments, leaving them to the thrill and terror of drugs–taking and selling them, and the wisdom of peers who are just as unmoored. Warren is completely under the thrall of Dennis who tries to break Warren’s “stupefying losing streak,” tries to hustle him into bed with one of his girlfriend’s friends. Jennifer is in the yoke of being the girl who is only eyed for sex until Warren falls in love with her. Usually, when we meet these kids in our lives , they are shallow snarks, all bravado, no substance, but the trio in the play, no matter how inane their ideas can be, pull at your heart, enter it, and stay there after the curtain falls.

The set, an Upper West Side Manhattan studio apartment, is so real that you’re there, and aware of the city beyond.  Bravo to scenic designer, Todd Rosenthal. The lighting too, especially the way Michael Cera was lit up in his moment of revelation, was cleverly done by Brian Macdevitt.

For tickets and further info: 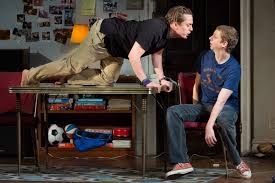