THE SPOILS at the The Pershing Square Signature Center

THE NEW GROUP presents THE SPOILS

Written by and featuring Jesse Eisenberg

Meet Ben (Jesse Eisenberg of The Social Network, Zombieland and also costar and writer of The Reivisionist) who, like Dennis in This Is Our Youth, is one of those rich New York kids who live off their parents. But Ben has an apartment to die for—a terrace that you worry various characters are going to jump from. The set, designed by Derek McLane features wide, comfy couches that I heard people in the audience sigh over. “I had couches like those,” or “I wish I had them.” But Ben, having been kicked out of grad school, is one of those lonely braggarts who believes he will make the great American film. Of course, the only thing he’s done so far is hector his sincere and endearing Nepalese roommate, Kalyan (Kunal Nayyar of The Big Bang Theory) and alienate Kalyan’s ambitious girlfriend, a doctor named Rashma (Annapurna Sriram (The Happiest Song Plays Last). When an old high school friend Ted, an investment banker (Michael Zegan of Bad Jews, Boardwalk Empire, and Girls) looks him up, Ben, who is hostile to every ethnic group, dismisses him as a Jewish banker. But when he finds out that Ted is about to marry Sarah, the girl he’s had a crush on since grade school, (Erin Darke of Still Alice), who gives a delightfully wise and nuanced performance, the already wired Ben hatches a plot to win her back. There are hysterical moments in The Spoils, but ultimately, unlike Dennis in This is Our Youth, what spoils the play is that Ben remains an unsympathetic hero. 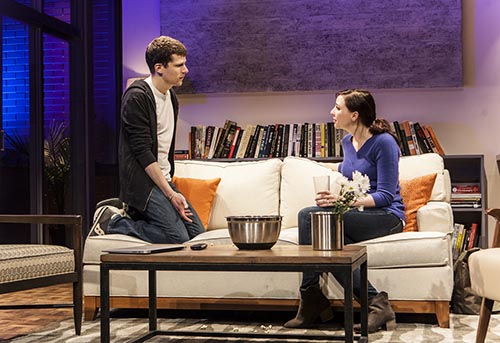 The New Group, in association with Lisa Matlin.

At THE PERSHING SQUARE SIGNATURE CENTER

for THE ALICE GRIFFIN JEWEL BOX