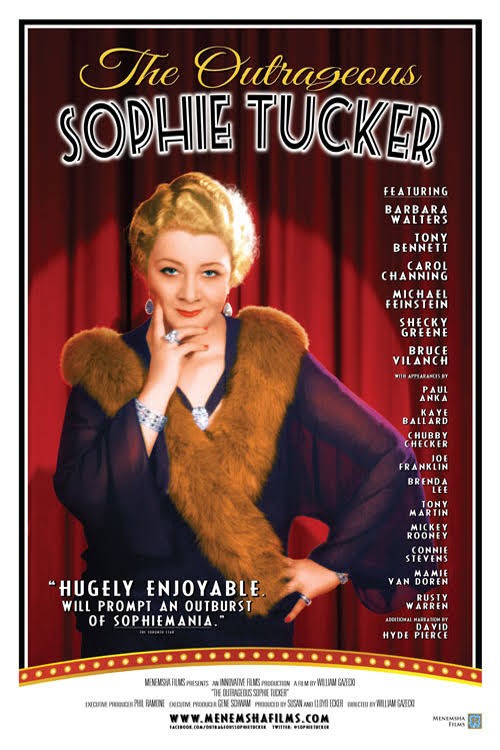 While on line to see a show at The Apollo Theater about ten years ago, I was telling my husband that I used to listen to Sophie Tucker, the famous Jewish Jazz singer, with my Grandma Ada in her living room. “I’m the Last of the Red Hot Mamas,” we’d belt out as the worn record skipped and scratched on the turntable of her Victrola.

An older gentleman in back of me said, “You have no idea what Sophie Tucker did for us black musicians. She was the only white singer who would buy our music at that time.”

I was surprised at the reverence he had for her.  Because of Sophie Tucker’s hefty build and her vocal style—loud, bawdy, with hesitations and syncopation—she was called a “coon shouter.” Managers insisted she appear in blackface.. One night, she “forgot” her burnt cork makeup and performed as herself, and the applause were thunderous.

Of course when William Gazecki’s documentary, The Outrageous Sophie Tucker came out, I had to see it. A kid comes over from Russia in steerage. She’s plain, fat, and has to slave in her parents’ luncheonette in Hartford Connecticut. She has a baby at nineteen, runs off, leaving the boy with her sister, and becomes a star. Yeah, the film has too many scenes of the film’s financiers—Susan and Lloyd Ecker—and nutty animations, photos that make Sophie shimmy. But don’t you want to learn more about Sophie Tucker?

Sophie hit right back at the fat-shamers, “Men like women with a little fore and aft,” she said, and even recommended a diet to gain weight. She approached businessmen who came to her shows and offered to endorse their products, for a fee of course. She played cards compulsively, always for money, and always winning by cheating. And could she promote herself! She collected addresses of everyone in every town she played—milkmen, bootblacks, and wrote them to say when she was going to perform there again.

She was close friends with Al Capone as well as J. Edgar Hoover. She let people be who they were. Hoover, a cross-dresser, felt safe enough with her to ask to borrow one of her spangled dresses. “I’m not letting him get into my dress,” she quipped.

During WWll, Al, a Jewish G.I. brought his record player overseas and played a glass record of Sophie’s Meine Yiddishe Mama over and over to the great annoyance of his army buddies. He swore he was going to blast it in the streets of Berlin after the allies one the war. Unfortunately, Al was killed. In his spirit, when the war was won, Al’s buddies strapped speakers to a truck and blasted Meine Yiddishe Mama through the streets of Berlin. .

She performed in theaters all over the world, including one in Far Rockaway, Queens, my childhood home. Maybe my grandmother went to see her live. She could be heard from the back seat of a large theater without a mike. And the theater was owned by William Morris. He invested in theaters before he became an agent. Sophie was one of his first clients and they worked for decades together with only a handshake as a contract.

See the Outrageous Sophie Tucker. You’ll find something in it to take away and keep as your own.