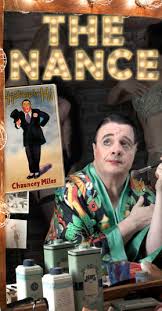 Douglas Carter Beane’s, THE NANCE, directed 3-time Tony Award winner Jack O’Brien, introduces us to the raunchy, boisterous world of burlesque in the 1930s, featuring the backstage story of Chauncey Miles (2-time Tony Award winning Nathan Lane) and his fellow vaudevillians. The contrast between the droll, campy, double-entendre-laced, onstage performance of Chauncey is a counterpoint to the tragic personal life of a homosexual who has to mock his own sexuality to get by. (Actually, it was so dangerous to be homosexual at that time that time that the Nance was usually played by a straight man.)

Who disappointed me was my former hero, Fiorello LaGuardia, who I had always thought of as a champion of progressive causes. Before seeing The Nance, I never knew that LaGuardia, an anti-prohibitionist who went as far as to demonstrate on TV how private citizens could make legal beer, would enforce laws that would oust shows like Chauncey’s from appearing onstage in New York City.

I was lucky enough to attend the pre-performance cocktail party for The Nance at the STRIP HOUSE MIDTOWN (15 West 44th Street. Oh, not that kind of strip. Steak with fabulous asides! It was named a top steakhouse by Zagat, given four stars by Forbes. The sultry red walls are hung with original Studio Manasse prints of 1930s burlesque stars.