Two actors,  Karen (Elizabeth Reaser) and Steve (Fred Weller) glam movie stars on the wane, desperate to keep their up their  upward trajectories, have agreed to do something  beyond risque in a film by a big European director to get them back on the pop culture radar.  Curtain opens at their  get together at Karen’s aerie in Hollywood to battle the terms out with their off-screen mates– Steven’s wife, starving starlet Missy (Gia Crovatin) and Karen’s partner, indie-filmmaker, Bev (Caroline Thorne). Karen has fallen from grace partly because she announced her bisexuality, Steven through aging . Is he forty-eight or fifty? Google always gets it wrong unless it’s a point he wants to make.

And Elizabeth Reaser is hilarious as a self-promoting, self-dramatizing actress with a lifestyle blog proves a good foil for Steve, who is homophobic and so dumbed down ( hints of drug history) that he doesn’t even know when he’s being offensive. Lots of laughs from the audience.

My favorite was feisty, acidic Bev (Callie Thorne) who felt so real that I swore I’ve met her.

So much to talk about here, and so much you can’t talk about, because the plot hinges around a secret. But it’s always satisfying to see the arrogant get their come-uppances, and with Neil LaBute’s writing and Terry Kinney’s directing,  they do. They surely do! 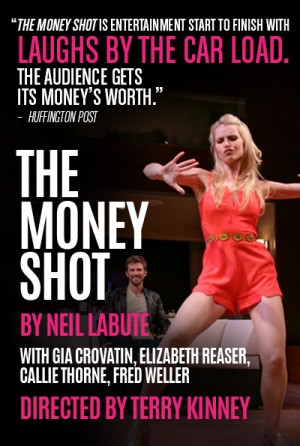