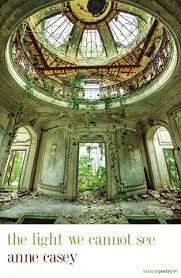 The light we cannot see

The light we cannot see

Anne Casey’s third collection of award-winning poems, the light we cannot see, forces us to witness, unblinking, the daunting challenges of our time—our immolating world with the loss of species which Casey lived through during the bushfires in Sydney. This is not a drill is a vivid portrait of what it was like to go shopping when the air was thick with danger inside and out. “the fire alarm goes off as i enter the shop.” A few lines later, we read, “the air quality app on my phone bleeps a warning. It is hazardous to be outside.” Then came covid with its isolation and fear. All of this is experienced though the eyes of a mother terrified for her own children and every child’s future.

It was after her own mother died in Ireland where the poet was born that she felt the necessity of writing poetry, and with that learned the power of poems to speak to the heart across any boundary. Her first collection, where the lost things go (salmon poetry, 2017) contains the draper, an elegy to her mother published in the Irish times that elicited outpourings of sympathy worldwide, especially from other immigrants.

In every immigrant’s baggage

In her new collection, Casey, with quiet horror, recounts her family facing the death of her father-in-law in a way unimaginable in the past, but familiar to all of us living through the pandemic. This is from prayer-fish:

That today one cannot even mourn a parent who died in another country by visiting the gravesite is voiced eloquently in constitutional when a husband and wife go out for a walk their dog during the pandemic.

All we left behind

—cocooned half the earth

away—arms that had raised us

Casey’s mourning for the people she lost extends to mourning for our earth, damaged by materialism and greed, and does so with biblical overtones. Her poem, exiled, begins:

We flew with the wind,

Springs of these mighty

at the false altar.

Inspired by her Irish heritage with Gaelic motifs and echoes of Yeats, Heaney, and Boland, Casey’s poems keen with longing. She hears phantom gulls, “their haunting calls, warm and peppered with salt.”

After you put the book down, you can still picture her arresting images of nature against nature—a cormorant and eel wrestling for survival, a crow catching another crow’s black wing, both spiraling down. And, of course, her images of man ravaging nature. A particularly poignant one appears in Signals by sea in which she portrays her father, an eighty-three-year-old retired trawler captain worrying about the red sands washing in on the headland, and rusty trucks piled high with she-crabs, which now would never be able to reproduce.

But Casey does not leave us in the dark. She casts a spell of hope for the world gathering together in a “Wing of love over a bordered world.”