In her third poetry collection, The Last Girl, Rose Solari invites the reader into the life of a girl who disappears in daylight, a boy broken by war, a young nun who answers one of the ads to teach religion to the 19th century western settlers. We read of the loss of Solaris’ family members, love gone wrong, mourning for paths not taken, and ultimately the celebration of the writing life.

A whimsical image-maker, Solaris shows us how a child uses metaphor to understand the self which, in The Making, she compares to “Leggo, to be pieced together in almost/ innumerable ways…” Another Shore is, to me, like a credo of Solaris’ writing, a testimony to her powerful image-building. “It is essential to imagine/ one thing is another – as when/ the small hard winter apple becomes/ a globe for the dollhouse schoolroom,” she writes, and cunningly takes us to the pan of mud that becomes quicksand in which a G.I. Joe is sinking. The innocence of her images ramps up the tragedy. Math and the Garden, about the death of her father, becomes more tragic by using counting as a child’s way to impose order on chaos. “It’s a matter of three and fours,” she writes, “like when my father died and it was/ him and me and what he called god…” The poem about the death of her soldier brother, Another Country, one of my favorites, also uses counting and precise imagery and a definite beat to break the reader’s heart. “How you could swing me up onto/ your big shoulders, my big brother, making us two-in-one, sky-slung,/a four-armed creature singing/ about the country he’d never seen.”

She takes clichés, idioms, and turns them into fresh language. Finally, there’s pleasure to be taken from all those years someone trying to hammer a point home. Of a tree house, she writes, “Time itself/ might have pressed these boards/ into rows, hammered home/ the nails…” And of all the things that came crashing down with a vengeance, would you ever have expected happiness to be among them?

Some of the poems have a religious theme, but where I’m awed is when Solaris takes an ordinary scene such as in Young Couple at a Country Fair and turns it into a cosmic experience. “If he were another boy, the night wouldn’t gleam,/ as now, at the turn of his head.” “…the spinning moment,/ rimmed in lights…” Solaris’ descriptions inbed themselves in you. Will I ever think of Persephone again without thinking of her as “Pale from the indoor life of winter…?”

There’s a range of tone, and subject matter, and setting that keeps us entranced. Whether Solaris brings us to the landscape of myth, or a waitress fantasizing about being a movie star, or an Ex-Pat on a physical island and an island of her own making, the emotions are charged, connecting us to our “first self, pre-body.” The spring of all creation. 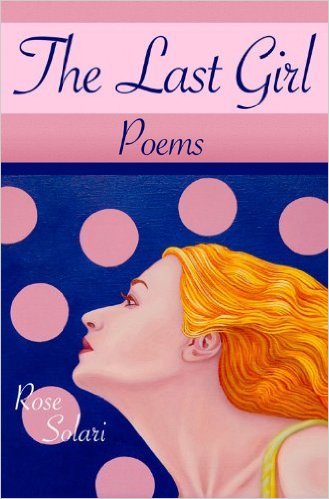