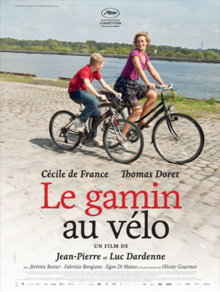 Seeing the French film, The Kid with a Bike, is a lesson in how to create a hero. The boy begins with hardship, a deep need. He can’t accept that he’s been abandoned by his father and won’t let love in the form of a neighborhood hairdresser who, in a random act of kindness, agrees to take him from his institutional home for the weekends. He is thwarted again and again in his attempt to reconnect with his father. Although this is the story of a specific boy, everyone can identify with the theme of abandonment, loss, and grief. Choosing a universal theme is one of the keys to getting the viewer to feel the feelings he sees on the screen or reads on the page. The modern hero, like this boy Cecile, is low-key in his emotions, not easily forthcoming. Watch Cecile after finding out that his father moved from his old apartment and sold his son’s bike. Does he cry about it? No, he shows his hurt by turning on the sink in the hairdresser’s beauty shop after she has warned him not to, silently staring down at the water cascading on his hands. Subtle, indirect way of showing his hurt which is more powerful than anything he could have said.