THE HEIRESS at the Walter Kerr Theater 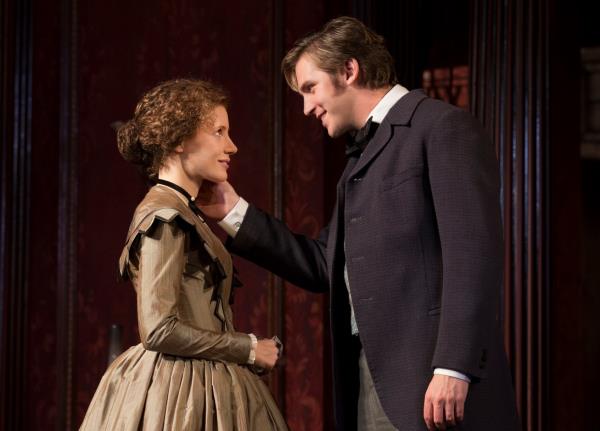 At curtain rise when a descending crystal chandelier is lit by an Irish maid, (Virginia Kull), I was transported to the Victorian Era with its bustling taffeta dresses, brandy snifters, writing desks, brocade wallpaper, and needlepoint easels. It made up for all the Downtown Abbey episodes I missed on Masterpiece Theater.

In my memory of reading Henry James’ novella, Washington Square Park, on which Ruth and Augustus Goetze 1947 adaptation is based, I didn’t recall how much comedy there was in this tragic story of Catherine Sloper, a socially backward, plain-faced young woman who gets jilted by the profligate Morris Townsend (Dan Stevens.) But ditzy, overly romantic Aunt Lavinia (Judith Ivey) set me straight. I was LOL from her misguided “help” for her niece.

At first, I was crestfallen to find out that Jessica Chastain’s understudy, Mairin Lee, would be Catherine that night.  I originally saw Cherry Jones in a 1995 version and my mind also kept flashing back to Olivia Haviland in her Oscar-winning movie role as Catherine. Happily, Lee’s performance turned out to be worthy of the standing ovation and bravas the audience delivered.

David Strathairn plays the most subtle Dr. Sloper I’ve ever seen. A la Strathairn, Sloper is perfunctory and distracted rather than continuously formidable, which points up his cruelty toward Catherine even more. Sloper resents Catherine because her beautiful, talented, and brilliant mother died giving birth to her, leaving him with an awkward daughter he will never appreciate.

The story is full of Jamesian twists and turns, but all psychologically grounded. James saw clearly into the Victorian woman’s plight—her forced dependence, the power others could wield over her. It’s a tale of a woman opening her eyes to painful truths and choosing her own destiny. Is that ever stale?