The Greatest Showman–Hugh Jackman is!!!!

There’s a critic in the movie, THE GREATEST SHOWMAN, who sits grimly through P.T. Barnum shows and calls them “humbug” in the press.  Barnum approaches him to say that it’s a humbug for a critic not to be able to enjoy the smiles his shows put on the audience faces and that it’s a humbug to be a critic and not be able to enjoy theater.  Ditto for the folks who dunned this movie, or rather this cinematic musical. The songs were terrific, meaningful. The themes of accepting oneself, love conquering all, including racism, never gets old. People who decided to see for themselves rather than trust the reviews, applauded at the end, and walked out teary-eyed. It’s a film you can bring your children to. Hope you see it. 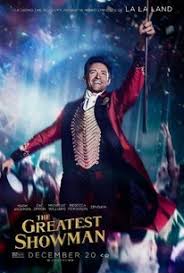