THE EFFECT at the Barrow Street Theater 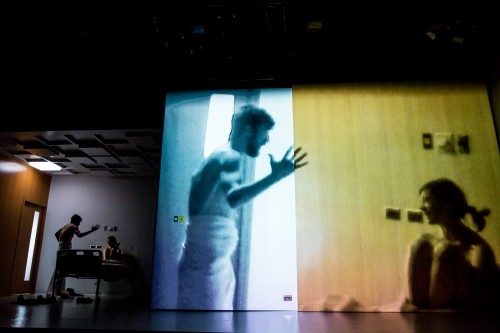 What if you are paid to stay at a clinic for a month to test the effect of an antidepressant and romance is forbidden because it will play havoc with the controlled experiment? Despite signed contracts, two young participants, Connie Hall (SUSANNAH FLOOD of Tribes, Scenes from a Marriage, SVU, Chicago Fire) and Tristan Frey (CARTER HUDSON  of Abyss, HBO: Crime, Codes of Conduct) tumble wildly into love and into bed. (Not necessarily in that order). Connie, a psych major, freaks out about whether their feelings are drug-induced or the real deal. Is she the one on a placebo or is it Tristan? Connie has to know. She has a life outside the walls of the clinic—a degree in psychology to finish and a 40ish boyfriend/professor with a son who is leaving his wife for her. Tristan, on the other hand, takes life by the seat of his pants when he isn’t taking his off. Her questions madden him. He just wants to run away with her, backpack across the country, not live a nanosecond outside the moment.

To complicate matters, they are under surveillance by Dr. Lorna James (KATI BRAZDA, A Moon for the Misbegotten) a psychiatrist with a history of depression that is amped by her fear about the dangers and validity of this test. The ruthless Dr. Toby Sealy (STEVE KEY,  A Thousand Acres, Chicago Fire, Blackmail) on his third marriage, has toyed with Dr. Lorna romantically, and is browbeating her to make the test results in the drug’s favor. “Emotions aren’t real, anyway,” he says. You have to wonder if they are all test subjects being watched.

Playwright LUCIE PREBBLE’s The Effect, won the Critic’s Circle Award for Best New Play in 2013 when it was performed in London.  What a twist on boy meets girl! What a philosophical, witty probe into the role of antidepressants in our lives.

Speaking of effects, wait until you see the way shadow and light is used to relieve the white florescence of the clinic and the multimedia approach that heightens the drama. A woodsy mural brings in a breath of air at just the right times.

Even as I left the theater, I was still worried about the fate of Connie and Tristan. Valium, anyone?

Tickets can be purchased by visiting SmartTix.com, on the phone at 212-868-4444, or in person at the Barrow Street Theatre box office. Visit www.BarrowStreetTheatre.com