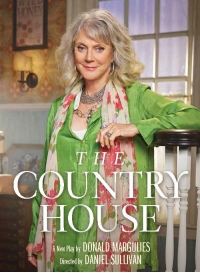 I’m such a fan of Pulitzer Prize winner Donald Margulies‘ Dinner With Friends and Brooklyn Boy that I couldn’t wait to see his latest play,  THECOUNTRYHOUSE, directed by Tony Award winner DanielSullivan and produced in conjunction with the Geffen Playhouse.

When Tony and Emmy Award-winning Blythe Danner (The Commons of Pensacola, Meet the Parents) playing actress Anna Patterson dramatically sweeps into her Berkshires summerhouse, adjusting and readjusting her long silky scarf, and finds her granddaughter, Susie Keegan (Sarah Steele of Slowgirl, Speech and Debate) a Yalie psych major in a t-shirt and ripped jeans reading  a thick book on the couch, the air begins to electrify with all the conflicts that will develop. This country house reunion coincides with both the Williamstown Theatre Festival in which Anna is the star and the one year anniversary of the death of Kathy, Anna Patterson’s beloved actress-daughter and Susie’s mother. Can Anna, so hungry for the spotlight, keep this an intimate family occasion? No. When Susie learns Anna has invited  heart throb Michael Astor (Daniel Sanjata, TNT’s “Graceland,” Take Me Out).) a star with a TV series, plays, movies, and women notched in his belt, Susie is disgruntled. Worse, when Susie’s father, 66 year-old Walter Keegan (DavidRasche, Regrets Only, Speed-the-Plow),  a successful director of teen boy movies, brings his young actress-girlfriend, 35-year-old Nell (Kate Jennings Grant, The Lyons, Proof) Susie is outraged.  Anna’s son, Elliot Cooper (Eric Lange, FX’s “The Bridge,” “Weeds”) depressed and bitter that he’s had no success in the arts realizes that Walter’s fiance is someone he’s had a prior history with, the roof is ready to blow off the country house.

How a play of tragic missed opportunities for love can be so darn funny is Margulies’ gift. Wicked humor about theater had the theater buffs chuckling. But the roles they play in each other’s lives bring tears.

Under the leadership of Artistic Director Lynne Meadow and Executive Producer Barry Grove, MTC has become one of the country’s most prominent and prestigious theatre companies. Over the past four and a half decades, MTC productions have earned numerous awards including 6 Pulitzer Prizes and 19 Tony Awards. MTC has a Broadway home at the Samuel J. Friedman Theatre (261 West 47th Street) and two Off-Broadway theatres at New York City Center (131 West 55th Street). Renowned MTC productions include Casa Valentina; Outside Mullingar; The Assembled Parties; Venus in Fur; Master Class; Good People; The Whipping Man; Time Stands Still; The Royal Family; Ruined; Come Back, Little Sheba; Blackbird; Shining City; Rabbit Hole; Doubt; Proof; The Tale of the Allergist’s Wife; Love! Valour! Compassion!; A Small Family Business; Sylvia; Putting It Together; Frankie and Johnny in the Clair de Lune; Crimes of the Heart; and Ain’t Misbehavin.’ For more information on MTC, please visit www.ManhattanTheatreClub.com.

The Geffen Playhouse has been a hub of the Los Angeles theater scene since opening its doors in 1995. Noted for its intimacy and celebrated for its world-renowned mix of classic and contemporary plays, provocative new works and second productions, the Geffen Playhouse continues to present a body of work that has garnered national recognition. Named in honor of entertainment mogul and philanthropist David Geffen, who made the initial donation to the theater, the company was founded by Gilbert Cates, and is currently helmed by Artistic Director Randall Arney, Managing Director Ken Novice, General Manager Behnaz Ataee, Chief Development Officer Regina Miller and Co-Chairs of the Board Martha Henderson and Pamela Robinson Hollander. Proudly associated with UCLA, the Geffen Playhouse welcomes an audience of more than 130,000 each year, and maintains an extensive education and outreach program, designed to engage young people and the community at large in the arts. For more information, please visit www.geffenplayhouse.com.