When my husband, Bernie, was three (sixty-eight years ago), his father took him to Ringling Brothers as a surprise after his little brother was born. Nothing like time alone with a father to assuage being dethroned from not only “only child” status, but “only son,” as well. His father got front row seats.  Little Bernie, breathless, leaned as far forward in his seat as he could, thrilled. And then, a lion got sick of the lion tamer cracking his whip and sprung at the lion tamer and devoured his arm before the lion could be shot dead.

Little Bernie began to have nightmares, screaming “Lion, no!” in the middle of the night. He grew wan and skinny and kept his head down during the day.

The therapist listened to his parents tell what had brought them there. Then his parents were sent to a waiting room to wring their hands with other parents. But when they came back, the psychologist surprised them by saying, “Your boy will forget about it in time.”

And it seemed to be true. As soon as he was old enough to get out on his own, he played ball every day. He became an avid stamp collector, biking to the post office for each new edition. He grew wild for the Yankees and collected every baseball card that came out. (Years later, when he found out his mother had thrown them all away, he could have used a therapist). But about ten years ago, when the blood pressure medication he was put on caused nightmares, he woke me every night shouting about the lion until his medication was changed.

So when we took our grandkids to the circus, I was thrilled it was The Big Apple Circus that had no lions, tigers or bears. The only animals in the show were horses and dogs, and those, for me, weren’t the best acts. Why should dogs have to jump through hoops and why should horses have to have whips cracked at them and ride for hundreds of miles on the road in a trailer instead of loping around a ranch? The rigorous work of circus performers should only be taken on by those whose dream it’s always been to do it. No dog or horse could say, “This was all my idea.”

The human acts in The Big Apple Circus are spellbinding feats of balletic grace. I never saw a juggler juggle so slowly, with such style, while he does a split.  A woman spins scores of Hula hoops around his slinky body, sometimes so many that she looks like a Slinky. Acrobats vault each other into the air, one landing on a single stilt. Men spin in the air on a Ferris wheel-type gadget, jumping rope at the apex, sometimes with a blindfold on. Phew! The clowns are classy, expert in Mime, and progenitors of belly laughs.

You don’t need a kid with you to love it. Lots of adults came solo, or with friends, or with dates.

Each year, the Big Apple Circus goes worldwide to find new acts.  It’s a nonprofit organization that gives generously to children in hospitals, disadvantaged children, the developmentally disabled, and many other worthy causes. 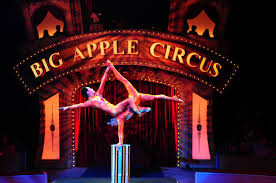