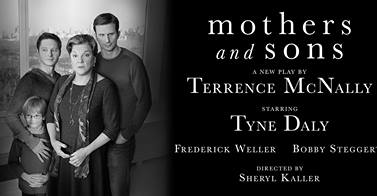 Imagine that the mother of a former lover who died stops by your apartment unexpectedly to give you her dead son’s diary, which neither of you want because it feels too private and too painful to read. And now imagine that this mother’s son, a twenty-nine year old actor has died of AIDS in the 80’s, and she not only blames his lover for “making him gay,” but also believes that this man has put her son at risk for AIDS. And here she comes, newly widowed, looking for a scapegoat for her considerable rage, and finds out her son’s lover now has a husband and a son and is happily married in the era when this is possible. What fodder for fire-cracking drama!

Now think about the mother being tony and Emmy-Award winning TYNE DALY and her son’s lover Obie and Drama Desk Award winner FREDERICK WELLER. Add in that his spouse  is Tony-Award-winning nominee, BOBBY STEGGERT, and their boy is GRAYSON TAYLOR, new to Broadway, but a real star.

The silences are as important as the words, so bring cough drops. There is something about Frederick Weller’s long hands that are even more expressive than his face. And Tyne Daly will, no doubt, get another award for her performance.