THE NEW GROUP presents STEVE, a comedy of manners for this hilariously manner-less play by newcomer playwright, MARK GERRARD, that seems to ask, What now for the LGBT community? How do gay couples manage the ordinariness of marriage? Monogamy? Childrearing? Being In instead of Out?

The play is roiling with Steves. Steven (MATT McGRATH, Cabaret, A Streetcar Named Desire) and Stephen (MALCOLM GETS, Macbeth, The Story of My Life, Amour) marry and have a child together. Steven becomes the stay-at-home dad. Steve’s buddy Matt (MARIO CANTONE, Sex in the City,) and Matt’s partner, Brian (JERRY DIXON, If/Then, Five Guys Named Moe) have their trainer move in with them, and not for the purpose of guiding their workouts. “What gay man hasn’t had a threesome?” Matt asks. When the two couples and their lesbian pal, Carrie (ASHLIE ATKINSON, Fat Pig, 30 Rock, Bridge of Spies) meet to celebrate Steven’s 47th birthday, betrayals smash the party like broken tableware. Enter a young Argentine waiter/dancer, Esteban (FRANCISCO PRYOR GARAT making his off-Broadway debut) who tangos off with the cuckolded Steven. And there’s yet another Steve. Stephen Sondheim whose lyrics weave through the show. There’s also lots of dishing about celebs that will fill your catty quota before the New Year is out.

Director CYNTHIA NIXON (need I announce her role in Sex in the City along with over 40 plays, 11 on Broadway, and…phew…all her other show biz achievements?) has the performers belting out songs at a piano bar before the curtain goes up. There’s lots of sexting that gets projected on the wall that we probably could have used ten minutes less of, at least. The piano bar before curtain rose helped warm up the audience and set the tone. In this gay comedy, there’s no way to keep a straight face. 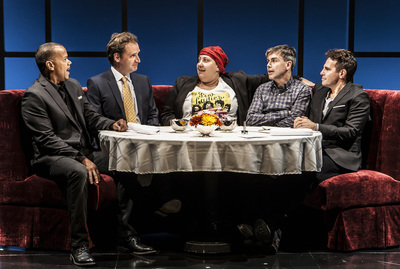