SEMINAR: How much Humiliation does a Writer need to Write? 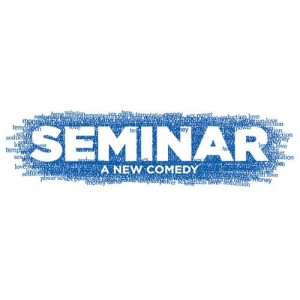 Watching Theresa Rebeck’s searing and funny play, Seminar, at The Golden Theatre, about an unethical, power-mad, but brilliant celebrity editor, Leonard (Jeff Goldblum) giving a $5,000 a pop seminar to wannabe writers, I was haunted by the memories of a few of the writing instructors I had had. Like Leonard, their teaching tools were humiliation, not just of your work, which they ripped apart with barely a glance, but your life was fair game as well. One teacher told me that I should learn to speak differently. He was a Queens brat like me, but had taken on a pompous, professorial tone. Even when he spoke one-to-one with you, he orated. And oh, how thumb-nosed I was for living in suburbia and being married with children, never mind that that was part of the theme of my first novel that I went on to publish with a major house.

If you dared to defend yourself against the teacher’s tongue lashings, you were licked. Leonard snipes to Kate (played by Lily Rabe), “If you’re defending yourself, you’re not listening.” If you tried to defend any of your classmates, it only went worse for them and for you. “If it were really good,” Leonard barks, “you’d fucking hate it. Writers in their natural state are as civilized as feral cats.”

Good thing I came to writing in middle age, because Izzy (played by Hettienne Park) was like just one of the many young women I saw who would have made Gloria Steinman plotz by screwing her way into the teacher’s favor, usually only to be dropped after the seminar was over. (Sometimes during.) . But for the women in this play at least, the great and terrible Leonard did throw them some literary crumbs. I had to laugh (a nervous and sad titter) at Leonard’s outrage that freshmen were now legally off-limits to him.

Was it worth all the money I invested in taking my own writing seminars? The time? The humiliation? Yes, because that’s what I needed to do to tell myself that I was really a writer back then. Even though I did have some fine teachers, the ones who humiliated me prepared me for things I’d have to face as a writer: scathing public reviews, readings where only two people show up and that’s because they were already in the bookstore and noticed that you put out a platter of cut-up cheese. How about the people who look at your picture on your book jacket, then back at you, and say, “I didn’t expect you to be so old.”

I had some nurturing writing teachers as well who didn’t go after a first draft like a shrike, tearing it to bloody shreds. But those classes wouldn’t have been entertaining enough material for a play. In fact, when Leonard does open his heart to Martin’s (Hamish Linklater’s) talent, the play falters. We want the blood!

Still, seeing Seminar has confirmed my commitment to never have a thing to do with another writing seminar. But, ahem, I must admit I do teach them.

Today, one of Leonard’s acid lines to Kate kept clopping me on the head. “Your story is a soul-sucking waste of words,” he said. It was as if Leonard had meant that line for me. All my writer’s angst was stirred up. But I did what I have taught myself to do. I turned on my computer, quieted the critical voices, and began to write.