review of WHEN SHE WAS GONE by Gwendolyn Gross

WHEN SHE WAS GONE

I know, I know, you’ve all barely finished Flynn’s Gone Gil and now here comes another book about a missing girl. But Gwendolyn Gross’ in When She Was Gone creates a special kind of magic. First of all, she makes you love Linsey Hart, the Cornell-bound girl who goes missing as much as Flynn makes you hate Amy Dunne. Instead of the usual hyper-frenzied search, Gross introduces us to a whole town of quirky, but believable characters who not only let us know what they know about Linsey, but also reveal their own darkest secrets which intertwine like a cat’s cradle, passing from one neighbor’s hands to another’s.

Through Mr. Leonard, an aging music teacher who wears his dead mother’s gowns while playing the piano and through Jordan House, a nineteen-year-old genius, a musical prodigy who dropped out of life, Gross makes us understand the passion of listening to, playing, and composing music. She also, with medical accuracy, knows how the body works, and doesn’t. Through Geo, a strange black child in a family that looks white, we learn so much about nature that I am eager to come upon a stink bug, a species accidentally introduced into our eco-system.

You can read this book purely as story or you can stop to ooh and ah over her metaphors, which are startlingly original, yet fit perfectly. The middle-aged married woman (I won’t reveal her name or it will be a spoiler) who is having an affair with Jordan notices his cast-aside cello is “the tawny animal of an instrument, out of its case, on its side like an odalisque.”  And how’s this for the breakup of a marriage? “…the long division of divorce.”

The way Gross describes bodily sensations make you feel them, too. Timmy, Linsey’s former boyfriend, misses her so much that he feels a weight on him like when he wears a lead apron while getting a dental x-ray. The woman having the affair (I’m still not telling) is afraid to say anything at the dinner table lest “lust would fall out of her mouth like a fat slab of tongue at the butcher.”

Instead of using the characters’ names as chapter headings, Gross uses their addresses. And as you read this quietly told tale, you become familiar with whose house you’ll be entering on Sycamore Street and you’ll find your breath growing rapid as each door opens for you. 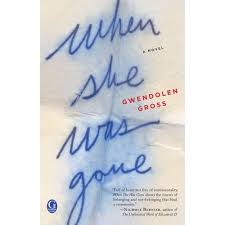