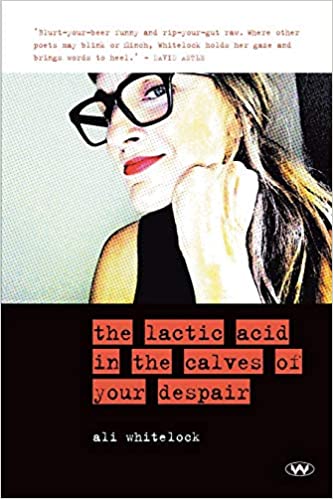 the lactic acid in the calves of your despair

the lactic acid in the calves of your despair

the lactic acid in the calves of your despair is the second groundbreaking collection of Ali Whitelock, a Scottish poet living in Australia. Her poems are profound, political, sassy, and so achingly intimate that they will bring you alternately and sometimes simultaneously to laughter and tears.

How does her work break ground? Well, look at the titles—the great fucking wall of china or a poem walked into a bar or the dandruff in the dry spot of your longing. Who ever heard of anything like these titles? But they are never off the mark, different just for effect. Each one launches you into her theme, her voice, the thumping heart of the poem.

Whitelock shakes up language, changing old-saws into something specific and startling. In not much of a mother in four parts, part 1, she writes, “i admire women falling pregnant at the drop of a fedora.” Another of the many examples of her wordplay appears in the title now in the modem of our discontent about the internet going down for a day where she ends up going to bed early reading “a book that had once been a tree.” Her metaphors create images you can’t shake. Describing her father, she writes, “you sat sleeveless, the solitary hair / in your small-pox scar corkscrewed from your upper / arm like a mung bean on a sheet of damp paper—”

Groundbreaking too is how the collection is put together. In the grief-drenched poem, I am the sea, the second of the collection, Whitelock doesn’t tell the reader that Andrew is her brother. She just calls him Andrew as he whips a kite out of his backpack and runs along, calling back, ‘c’mon, Ali, c’mon’ in such a rallying moment. And in the last stanza, when she writes “and days later with him already too long gone,” we know she is speaking of her father because the preceding and first poem of the collection, in the silence of the custard is about her last dinner with her father before he died. And the following poem, not much of a parent in four parts, part 1, it becomes natural for her to explore what it might have been like had she been a mother, all the terrors, and within the same poem, she delves the heartbreak of hysterectomy, and the loss of her treasured dog, hector. The other three parts of the “not much of a parent” series, are placed at the perfect moments throughout the book. This construction of this collection feels completely intuitive by the amazing flow as you read it, but looking carefully, you see the artist’s mind cannily collating, choosing, ordering.

In Robert Haas’s A Little Book on Form, he writes “Wittgenstein once remarked, ‘if you want an image of the soul, look at the body,” and this is exactly what Whitelock does in a way you’ve never heard before. You can see this in her titles and in her descriptions. In scottish dirt, she describes finding her father, after being beaten by thugs. “we found my father’s / broken body splayed on the carpet, limbs at obtuse / angles like a wooden marionette dropped out / of the sky” Not one word of how she feels is needed after this. Her images haunt her, haunt us. We can’t blink them away. In if you have no eyes where do the tears go?

you are lured in after your father’s funeral

by the flouro lights bright as the mushroom cloud

you’re not meant to look directly into

lest it burn the eyes right out of your fucking

Down Under author and radio personality David Astle wrote that Ali Whitelock’s poems are “blurt-your-beer funny and rip your gut raw. Where other poets may blink or flinch, Whitelock holds her gaze and brings words to heel.”

My favorite salute to her cutting-edge work is by the Australian poet, Mark Tredinnick. ‘Whitelock is Bukowski with a Glaswegian accent and nicer wardrobe.”