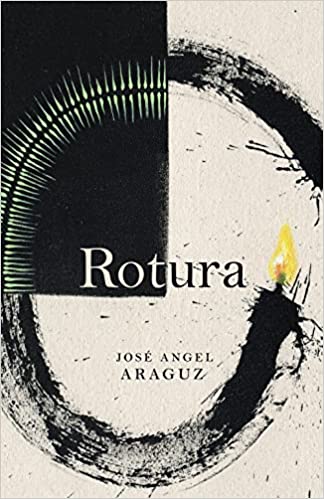 While reading Rotura, the first collection by well-published poet Jose Angel Araguz who holds a Ph.D., I am carried along in waves that are sometimes whispered, sometimes crashed against the heart. Rotura, according to the translation in Lingue, means “break, tear, rip, crack, rupture,” a perfect description of the plight of immigrants torn from their countries and thrust into an unwelcoming world.

The first poem in the book, A Question Before the Election, is his answer to his mother asking, a month before the 2016 election, if he ever heard of the KKK because she wanted to shield him, years too late, from history. He writes, “…my wife and I will begin unpacking what is not wanted here…”  The list, that is so important in Araguz’s poetry, is harrowing:

from threats and sideways,

of glass bottles broken behind me

yelling: Go back to your country!

Araguz writes dirges that make you unconsciously mouth the words as you read, having you feel the ebb and flow of language that befits his river themes. In Language Dirge, he writes:

…but the river is not about

being heard, but about being

in motion, in this, the river

Water that used to be the only thing that separated us from Mexico before electric lights drowned out the stars, now flows tainted from taps in communities of color. Araguz’s description of his mother trying to take a shower when only bottled water was okay made me not only understand but fall in love with her as anyone would reading Corpus Dirge, a terrific title for corpus as body and Corpus Christi Texas

my mother who made sure

from the tap, who attempted

to shower with bottled water

a few times only to give up,

her arms giving out

after double shifts of work

Araguz begins one of his dirges with this quote from T.S. Elliot: I don’t know enough about gods; but I think that the river is a strange brown god—sullen, untamed, intractable… (The Dry Salvages from Four Quartets.) After this nod to Elliot, the canon of white male contemporary poetry, Araguz in Rio Grande, Rio Bravo Dirge, addresses him as Thomas and gives him a witty smack-down of all Elliot doesn’t know of rivers, such as

and the dark gleam of gods

that gleam over the badges

By the next dirge, Water Dirge, Araguz is addressing Elliot as Tom.

Do you know much about the silence,

when I’ve been seen as sullen, untamed, intractable—

By this next dirge, Araguz, continuing to let Elliot know his ignorance of rivers, addresses him by the childhood handle, Tommy. The next dirge, Elliot is reduced to T.

How beautifully this collection is structured—lines echoing within poems and within the span of the book so notes and themes are struck as if orchestrated by the baton of a maestro. Rotura is a display of fierce wit, invention, pathos, and purpose, the mark of a poet stepping rightfully into his place in the literary world.