Pulitzer-Prize Winning, THE FLICK, at the Barrow Street Theather 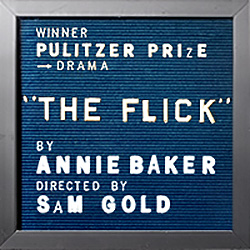 On May 18, 2015, NYT theater critic Charles Isherwood wrote in his review of ANNIE BAKER’S Pulitzer-Prize winning play, THE FLICK, “I’d bet a pile that the response to the play will again run along similar lines. Nobody lurched up and stalked out during the (90-minute!) first act at the performance I saw, but the auditorium was mildly pockmarked with empty seats after intermission.”

Well, I wish that were true for the Flick’s revival I attended today at the Barrow Street Theater. After the first excruciatingly slow act where you are made to feel the boredom of over-qualified people forced into menial jobs in a dying movie house–Rose, a projectionist ( NICOLE RODENBERG) and the two concession stand guys and mopper-uppers, Avery (KYLE BELTRAN) and Skylar (BRIAN MISKELL) an audience member screamed “Boo, Kill the Playwright.” I was ready to hear shots ring out, but luckily the lout only stormed out of the theater.

During the 15 minute intermission, a woman told me she had come to see it because of her love of the director, SAM GOLD‘S, Fun Home. If that is your motive, this is so different that go see something else.

Yes, there were many seats after the first 90 minute act, but I was glad I stayed. The characters are like so many brilliant young people we find out in the wold today who, through lack of family financial and/or emotional support, end up depressed, and stuck. There are many wise lines as well as wise-guy lines. The zany dance that Rose, wearing black, breaks into is like the dance macabre, a skeleton rattling her bones. But when you see her rebuffed seduction of Avery and Skylar’s avowal of love for her, your heart will break.

THE FLICK will run only to January 10th.