Poetic Activism: Honoring Earth Day for the World and Universe

Poets are rarely thought of as activists, and poems—especially poems about nature—rarely go hand-in-hand with geopolitical considerations. Not so Sublime Planet, a collection of poetry (some of them award-winners) from Magdalena Ball and Carolyn Howard-Johnson.

Conceived as the 6th book in the two poets’ award-winning celebration series of poetry, Sublime Planet includes one winner of the coveted Franklin Christoph prize and is endorsed by Suzanne Lummis, UCLA poetry instructor. She says, “Sublime Planet begins with Carolyn Howard Johnson’s love poems to the living world, rapturous poems, expansive in spirit yet precise in detail: ‘An impossible moth,/dark eye at its center, opaque//helicopter blades buzz and blur… .’ In Magdalena Ball’s darker meditations, hurt and thirst have entered the world facilitated, in part, by the machinations of civilization. While Howard-Johnson’s poems praise, Ball’s seem to sound a low warning. I recommend Sublime Planet particularly to those individuals who reside on this planet.”

Ann Howley, also an award-winner and known for gift cards on fine linen featuring her photography, has contributed the cover and interior artwork.

Sublime Planet will be released just in time for Earth Day, too and until April 1 is being launched as a free e-book at http://bitly.com/EarthDayKind. The poets are from two different hemisphere’s making it truly an international effort. All sales proceeds from Sublime Planet will be donated to the World Wildlife Fund (WWF).

Magdalena Ball runs the highly respected compulsivereader.com review site. She is the author of the poetry chapbook Quark Soup, which won a 2006 “Noble” Prize from MyShelf’s Back to Literature site, a poetry book Repulsion Thrust and the novels Black Cow and Sleep Before Evening, which was a Next Generation Indie Book Awards Finalist.

Carolyn Howard-Johnson’s poetry appears frequently in review journals. She is listed in Poets & Writers highly respected catalog of poets and her chapbook of poetry, Tracings (www.budurl.com/CarolynsTracings), published by Finishing Line Press was given the Award of Excellence by the Military Writers Society of America. She is an award-winning novelist and short story writer and will be given her community’s Diamond Award for Achievement in the Arts on April 29.

Excerpt from Carolyn’s section of the book:

after the brush burns
petals fall where no apple trees
grow, swarm against a sky
like winter-flakes, soft. white.
but warm. evening breathes
them to dust, or I, with the merest
touch

Excerpt from Magdalena’s portion of the book:

And what of water?

you drink every day
the most abundant compound

on the earth’s surface

sea water
water vapour
ice
70% of the human body
you know all that
yet, licking moist lips
you also know
the habitable zone
depends on liquid water
just enough warmth
Goldilocks
down here of course
we take it for granted
slurp it down with abandon
let it drip down the chin
pour over the car
waste it
without a second thought.

Drink now
slowly
with the knowledge
that throughout the universe
aliens everywhere
your distant stardust relations
thirst. 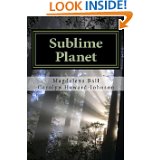