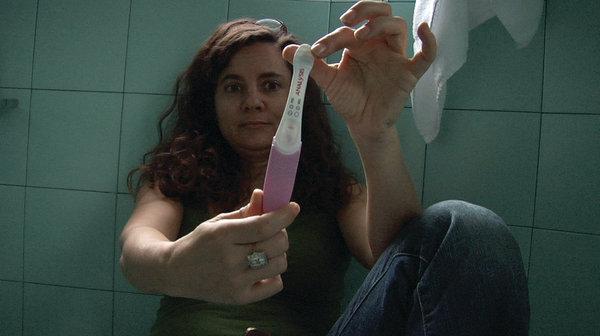 This hyper-intimate, hilarious  documentary premiering on HBO on July 29th covers Nina Davenport’s conception from the idea of becoming a single Mom at 41 to the birth of her son to his toddlerhood. Hillary Clinton said it takes a village to raise a child, but Nina Davenport shows that it can also take a village to conceive one. We watch her stonewall her gay pal, Dave, into donating his sperm and her sidekick, Amy, into giving her hormone injections in her stomach. And Amy doesn’t stop there. Amy becomes her birthing partner, her coach, her masseuse. Davenport is somehow both a darling and a bully when she sets her mind to something. I can only imagine that if I lived next door to her in Brooklyn, what I’d be roped into doing doing for her, and then miraculously feeling gleeful for the opportunity.

Because I write fiction that has a shape–a climax, a denouement, I always get antsy during documentaries. Like when are the penguins going to stop marching already? But First Comes Love was so compelling that I forgot the question. Afterwards, the only question that wouldn’t leave me was What is her son going to think when this movie is re-aired, maybe on his thirteenth birthday, say, and all his friends can see his mother’s breasts and a full frontal of her vagina?

But the world is changing, changing so fast that maybe her son will just say, “Pass the popcorn.”