My Life as a Zucchini

Go see this inventive cartoon starring marionettes who are more expressive than most in-the-flesh actors. This is like a Grimm’s fairy tale with humor and an ending that feels like you wished on a star for it. Who wouldn’t be moved by a story of a nine-year-old boy who accidentally kills his nasty drunken mother and is taken to an orphanage where he learns to trust and to love? I wouldn’t suggest bringing a kid to it. It’s too achingly real even as it is a delightful fantasy. 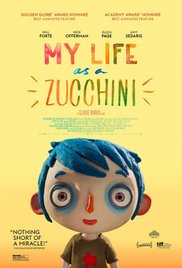