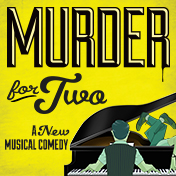 Farce-lovers, MURDER FOR TWO will have you yucking it up at the zany antics of the two gifted actors–Brett Ryback and Jeff Blumenkrantz. Ryback plays Officer Moscowicz, a small-town cop trying to solve the mystery of who shot the famous local author, Arthur Whitney, as he arrives at his own surprise party. The motive is obvious. Whitney wrote all their secrets in his novels that were passed to him by a pre-HIPA psychiatrist. Blumenkrantz, a dead ringer for an Edward Gorey character, morphs into so many characters that I lost count.

Let’s see.  Blumenkrantz plays the dead author’s wife, a dotty Southern belle who was shoved out of the spotlight as a ballerina by her husband, a niece who is doing a doctorate in crime and has a yen for Moscowicz, the gruff psychiatrist, a sexpot. Oh, yes, and by re-positioning a baseball cap on his head and walking on his knees, he plays three members of a chorus of pre-pubescent boys.

Wait until you see the actors play the piano while knocking each other off the bench, playing piano solo, together, sometimes with an elbow or foot, and hear them singing the campy songs. (Book and music by Joe Kinosian; lyrics by Keller Blair.)