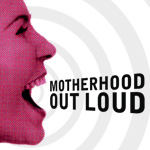 MOTHERHOOD OUT LOUD, now playing at Primary Stages after 59 E. 59th St, makes you feel as if someone has read your mind or your mother’s or your grandmother’s because no one would dare to say outright what these actors are saying on stage The twenty scenes, united by themes of mothering that span birth to death, were written by a collection of playwrights that includes Beth Henley, a Pulitzer Prize winner. Some of the stories are true, some are composites of the playwrights’ friends’ stories, and others are invented. But they all feel true, intimate, and necessary.

There is magic unfolding as you watch Saidah Arrika Ekulona (Obie award winner for Ruined) morph into a Muslim mother of a teenager who just got her period to  a divorced mother whose son is sent to Afghanistan, to a teenager interviewing her grandmother . James Lecense (winner of Drama Desk and Outer Critics Circle Award) is as believable whether he is playing the male character or the character’s mother, Elizabeth. Randy Graff (Fiddler on the Roof (2004) and winner of the Drama Desk and Tony winner) can have loud, pull-your-hear-out desperation as a sleep-deprived mother as well as quiet desperation in Queen Est4her when her plays a woman whose son wants to go to a Purim Festival as Queen Esther. Mary Bacon (The Good Wife, Law & Order) can go from the panic and joy of a new mother to a mother-in-law who needs wising up.

My prediction is that Motherhood Out Loud will libe like The Vagina Monologues, a piece that has both legs and staying power. It’s already been warmly received in L.A. and Greenwich Conneticut. I see it also lighting up stages in Florida, Texas,  Washington, and more, then going to London.

From Motherhood Out Loud, whether you’re a mother or not, you’ll get an appreciation for just how thorny the role is. You might even end up forgiving yourself for the inevitable messes you’ve made with your children or your mother has made with you. And all the while, you’ll laugh hysterically and become tear-glazed, knot-throated, what my Russian bubby used to call “farklempt.”

DISCOUNT TICKETS AVAILABLE if you call Ticket Central at 212-279-4200 or visit Primarystages.org and use the promotion code MOM9161