Embarrassed that I’d never heard of Mike Kelly before now. He was a West Coast artist, popular in Europe. So maybe that’s my excuse. But found him I have at P.S. 1. http://momaps1.org/visit/

His mysterious photo Psychic Waveforms, like Janette Jackson’s exposed nipple, is a result of a technical malfunction. In 2001 on a visit to Detroit where he grew up, he tried to take a picture of a sculpture garden and instead ended up with inexplicable wave-like patterns, and is signify the ephemeral nature of capturing psychic activity on film

In drawings ripped out of his notebook, along with sketches, he suggests hilarious ideas for fortune telling:

1. Sit in a chair and burn something nearby and what’s my future? Ans. : Cough and gag. 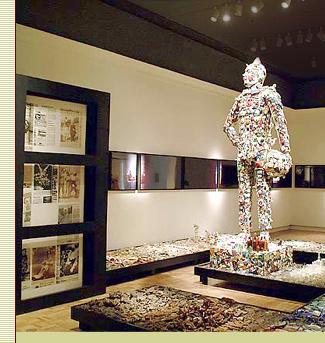 Put a bone next to each letter. When a dog picks up the bones, spell out those letters and you’ll get your fortune: What’s my future? A biscuit.

One of my favorite pieces is his statue of John Glenn for which he used the folk-art technique, “memory ware.” Surfaces are covered with broken bottles, tools, flatware, and pottery shards collected on one of the islands. This statue stood in the library of the high school Kelly graduated from. I love GREEN art. Wish you could see the thrilling color in person.