Oh, the teacher, Mr. Jagust, I had in high school who got up on top of the desk to act out scenes of Macbeth. He made us memorize passages and I found myself lip-synching with the weird sisters and Lady Mac Beth–“Out, damn spot, out,” and Hamlet’s “tale told by an idiot” soliloquy. There is pleasure in seeing a work of art that you’ve internalized like that. How I hope it’s taught with the same enthusiasm today and that kids can look up from their phones for a moment to take it in.

I found Marion Cotillard‘s performance more nuanced than Michael Fassbinder‘s. Although he’s brilliant, and probably would have paid for the opportunity to play Macbeth, I found that, at times, he slipped into his X-man character, Magneto.

Written by Jacob Koskoff, Michael Lesslie and Todd Louiso, and directed by Justin Kurzel,  the film opens with a wordless scene you may have to close your eyes for. Macbeth and Lady Macbeth, hooded in black along with other mourners in the wild and windy Scottish landscape, look down at their dead infant son, their only child. Hamlet bends to cover the child with a handful of earth,  places coins on his eyes, and lights the pyre.

The camerawork is inventive: battle scenes with blood spurting in slo-mo, scenes shot in candlelight, others in a greenish cast.

Beware: Seniors were asking for their money back. The voices are in the style of neo-mumble and the murkiness of many of the scenes made it hard for eyes that are waiting for their cataracts to ripen.

So wear you best bifocals and ask for a hearing device or bring one of those hearing horns if you can find  it in an antique store and gasp as this tale of guilt, horror, and revenge unfolds. 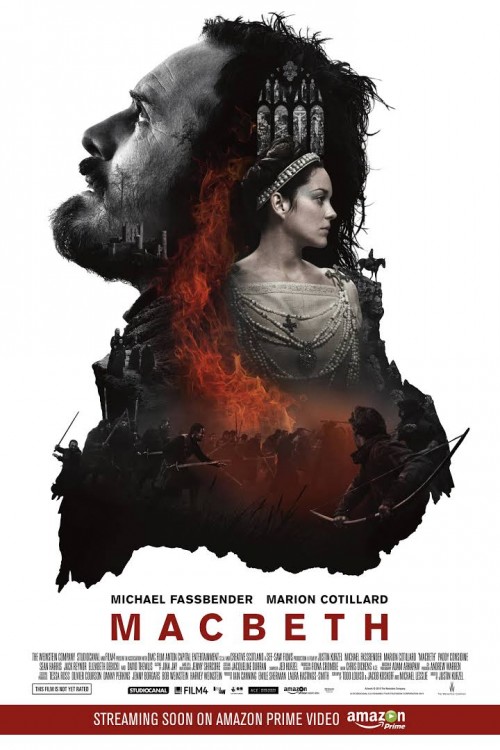