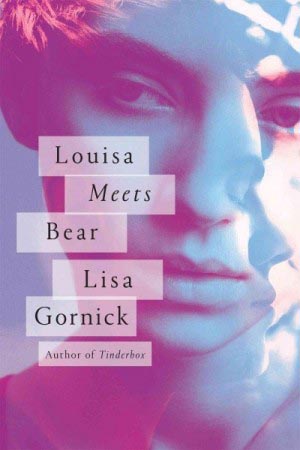 After wowing us with Tinderbox and Private Sorcery, Lisa Gornick had given us Louisa Meets Bear, ten linked stories which can stand alone, each so firmly that they have won awards, such as Distinguished Short Story in Best American Short Story anthology.

Each is a story of passion. Luisa, daughter of a geneticist, meet Bear, a plumbers son, and they plunge (no pun intended) into a stormy affair that affects their choices for years. In other stories a daughter stabs her mother when she finds out the truth about her father. A psychotherapist/wife/mother finds her teenage son in bed with a girl and a man dead on her office floor. A mother who has been separated from her son finds out that he has helped a blind woman learn to play the piano. Gornick paints each character with both unnerving truthfulness and compassion. Just as in the reruns of Law & Order that I compulsively watch, even the most minor of Gornick’s characters have personality. In Instructions to Participant, a mother who studying Social Work goes to a tenement to find a woman she’s supposed to interview. No one answers the bell. A boy sitting on a stoop has just blown his gum into a green bubble.  “The boy darted his tongue in and out to gather the gum back into his mouth. ‘Bells don’t work,’” he tells her.

The stories take you around the world—Italy, Russia, Guatemala and are grounded in world events—Nixon’s invasion of Cambodia, the killings at Kent State, the shooting a black teen by a policeman. There is danger pulsing through each story.

What’s most striking is the way Gornick makes time leaps in the story and also between stories. A story’s main character can turn up in a later story as a minor character or the child or lover of that character.  As you read, you think to yourself, Hey, don’t I know this guy? just as you do when you run into someone in life.

Writers will want to study the way she describes gestures, bodily sensations. She always stretches for an image. “My head throbbed at the thought, dissolving like a drop of colored water into a pool of oil…” For a literary writer, Gornick keeps you in suspense. Each chapter ends with a quiet wham! Each of her carefully composed sentences is a unit of drama. With masterful asides, she encapsulates a chunk of back story or the dynamics of a relationship. And what a sense of humor! “Despite her Arabian pants and embroidered Mexican blouse, Mahanna looked to Marnie like a girl from Short Hills who needed electrolysis.”

Gornick’s fiction is not only worth reading, but worth studying too. You can learn a lot about writing from her and even more about life.