LIVING ON LOVE at the Longacre Theater

In her Broadway debut Renée Fleming, as the diva Raquel De Angelis, brings this light comedy, LIVING ON LOVE, to life. Who knew that besides her exquisite, world-famous operatic voice for which she won four Grammies, she is a terrific comic as well? As soon as she enters the drawing room in her gorgeous Michael Krass designs, awed, you suck in your breath. And when she sings, even a comic riff, you sigh with pleasure.

When her husband, Vito, a temperamental, dramatic maestro played by Douglas Sills (The Scarlet Pimpernel) falls in love with a young woman hired to ghostwrite his totally fictionalized autobiography, Raquel retaliates by hiring a dashing young male ghostwriter to chronicle her life as a famous diva. Vito’s heartthrob, Iris Peabody, who he keeps referring to as “Irish,” is played by Anna Chlumsky (You Can’t Take It With You).  Robert Samson, Raquel’s new love, is played by Jerry O’Connell (Stand by Me, Jerry Macguire). In the screwball chaos, snow globes and silverware fly. Between the couples, there’s plenty of insider jokes about the publishing world and what it means to be displaced by Leonard Bernstein or aging out of a soprano voice to a deeper alto. And the madcap butlers played by Blake Hammond (First Date, Sister Act) and Scott Robertson (Cabaret, Damn Yankees) have their own secrets to reveal. Whenever Trixie, Raquel’s Pomeranian, comes onstage, she steals the show.

Two-time Tony Award-winning playwright, Joe DiPietro (Memphis), based this play on Garson Kanin’s Peccadillo, originally written in 1968. It feels like a summer stock production come to Broadway. And why not? Summer will soon be here. The production will play an 18-week engagement through Sunday, August 2, 2015. 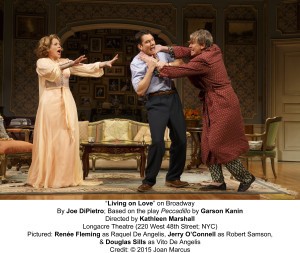 The producers are pleased to announce that at every performance, over 100 seats will be set aside to be sold for $25. Over 10,000 $25 tickets will be made available, bookable in advance, throughout the run giving more people an opportunity to experience this new play.