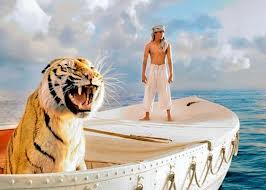 How did director Ang Lee make a movie from such short, yet multi-themed, complex novel as Yang Martel’s Life of Pi? The storyline is the typical hero’s journey. A teenage boy (Infran Kahn) whose family owned a circus in India is the lone human survivor of a shipwreck at sea. The other survivors are a zebra, a hyena, an ape, and a Bengal tiger named Richard Parker. And then there was two survivors—the young man and the tiger,

You will never believe that the tiger is animated. The Tiger In fact, the 3-D is so subtle that it shows you the potential of this medium beyond oooh wow effects.

Most of all, Life of Pi is a tribute to storytelling. Don’t we all love to be told a story? The movie is framed in storytelling and at the end we’re left to wonder which of the young man’s stories are true—the magical, heroic one or the darker one that he cannot bear?