Saw Timon of Athens at Theater for a New Audience in Brooklyn. Timon was played by Kathryn Hunter who was so great that I stopped kicking myself for missing Glenda Jackson’s performance of Lear. Kathryn, nee Aikaterini Hadjipateras, born to Greek parents in New York City, grew up in London, trained at RADA, and has won many awards as actor and director.  No longer felt bad about having missed glenda Jackson as Lear. Kathryn was born in 1957, so I was especially astonished by her physicality.

Thing about having a front row seat in experimental theater is that ii was splattered with fake blood, had dirt thrown on me and sprayed with cold water. 🙂 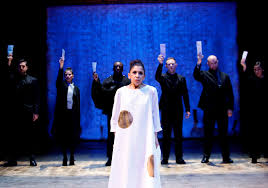