JEAN BAPTISTE CARPEAUX, (1827-1875) SCULPTURES AND PAINTINGS AT THE MET 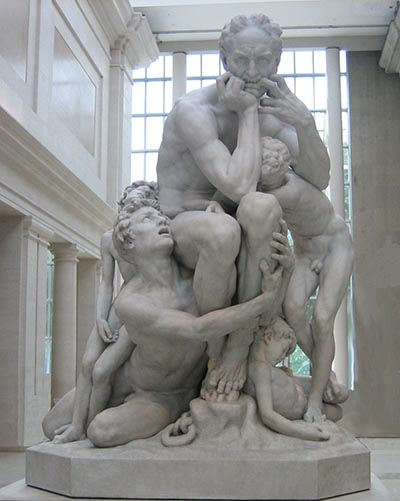 To find an artist you never head of before and have his work etch itself into your mind is a thrilling experience. Carpeaux knew how to capture emotion. Looking at his marble reliefs of the Old Testament, I found myself getting worked all over again about Cain slewing Abel, about Abraham being ready to kill his son, Isaac, to prove his faith. I am also ready to return to Dante’s Inferno where Count Ugolino earned his place in the realm of political traitors for a series of betrayals against Pisa and it’s political leadership. He, his sons, and two grandsons were held in a tower for eight months and then it was decided that the door should be nailed shut, the keys thrown in the Arno, to let them starve to death. Carpeaux’s sculpture of Ugolino eating his own hand and his sons begging to let him eat them instead is the stuff of nightmares.

But the pieces that actually interested me most were the sketches he made, whether in clay or watercolor or pencil. He walked around with paints and wet clay in his pockets. “It’s in the street that we learn our art,” Carpeaux said.  Attn: Writers, always carry a notebook!