Based on His Best-Selling Book

WITH INCIDENTAL MUSIC BY DUNCAN SHEIK 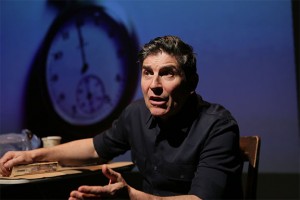 Who would believe that you can laugh during a show about a hate crime murder of a foster kid who is gay? When you watch James Lecesne seamlessly switch from a hard-boiled New Jersey detective to a gawky teenage girl, her nasty, yet open-hearted beautician mother, the English owner of a dance school, and several minor characters, you will find yourself LOL-ing. James’ writing and acting are quirky and flawless.

The plot keeps you leaning forward. The narrator, Dick DeSantis, the detective, is remembering a decade old murder of Leonard Pelkey, a boy who is shown, like a heartbreaking memory, as a blurry photo projected in the background. Yet he comes to life in all we learn about him. When asked to “tone it down,” Pelkey says, “And let the terrorists win?”

This theme of a teenager losing his life for being gay has lived in James Lescesne for a long time. His Oscar-winning short, Trevor, was about a teenager committing suicide because he was gay was based on his solo show “Word of Mouth.” Lecesne was co-founder of The Trevor Project, a suicide prevention program and hotline for gay and questioning youth. His current show is based on his bestselling young adult novel, The Absolute Brightness.

Not only does this play get standing ovations, but the Lower East Side theater, Dixon Place, dedicated to the development of works-in-progress from a broad range of performers and artists, has a non-profit bar where you can drink to the cause before and after the show.

THE ABSOLUTE BRIGHTNESS OF LEONARD PELKEY will run through March 28th.  Tickets are $18 and can be purchased by calling (212) 219-0736 or by visiting  www.dixonplace.org 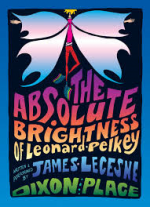