No wonder IRONBOUND written by playwright MARTYNA MAJOK (recipient of the 2015-16 PoNY Fellowship, The David Calicchio Emerging American Playwright Prize, and The 2050 Fellowship from New York Theatre Workshop) is a New York Times Critic’s Pick. Born in Poland and raised in New Jersey, Majok has the authority to write this timely and captivating story of an immigrant trying to survive in America.

At a bus stop in a rundown part of New Jersey, Darja,  a young Polish immigrant, has been so ruined by being led by her feelings that now she only wants to talk about the concrete.

“How much you give me?” she demands, one hand with its fingers pinched together, tapping the curled palm of her other hand as she confronts her long-term live-in boyfriend, Tommy (MORGAN SPECTOR,  A View From The Bridge, “Boardwalk Empire”). Tommy, who has been unfaithful numerous times with women Darja always finds out about, is affronted by her placing a price on cooking, cleaning, and having sex with him.

Darja (Tony Award Nominee MARIN IRELAND, Reasons to be Pretty) was perfect in her facial expressions, accent, and actions. You felt every word she said. Her eyes, her mouth, could convey both humor and terror simultaneously. Kudos to both Marin and the dialect coach, Charlotte Fleck, for the throaty Polish accent.

As the play progresses, we realize that twenty years of Darja’s love is unfolding in flashbacks and flash forwards, some almost dreamlike.  Darja’s passionate first love, Maks (JOSIAH BANIA, Sarah Ruhl’s Three Sisters at Yale Rep) her first husband and the man she came to America with, is determined that although he is also a poor immigrant, no one will take away who he is. And who he is is a musician with only harmonica and a dream.  Darja suffers, how she suffers! Poverty, ill-fated love, abuse. And yet, there is laughter, especially when Vic (SHILOH FERNANDEZ, Jericho and United States of Tara, Deadgirl) playing a hipster high school boy, comes on the scene in a fumbling attempt to rescue her.

Director Daniella Topol (When January Feels Like Summer, Row After Row) did a wonderful job making this spare, bare play a winner. Completing the creative team are Set & Lighting designer Justin Townsend (Vanya and Sonya and Masha and Spike, Bloody Bloody Andrew Jackson), Costume Designer Kaye Voyce (The Real Thing, The Realistic Joneses) and Sound Designer Jane Shaw (Another Side of the Island).

Rattlestick Playwrights Theater and Women’s Project Theater are pleased to announce a two-week extension to the limited engagement of IRONBOUND at Rattlestick Playwrights Theater (224 Waverly Place). Previously set to end on Sunday, April 10, the production – which opened on Wednesday, March 16 to widespread critical acclaim – will now play its final performance on Sunday, April 24, 2016. 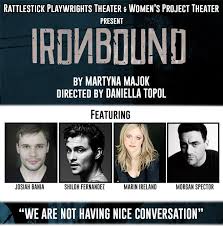