HOMESMAN, How women fared and didn’t in the Old West 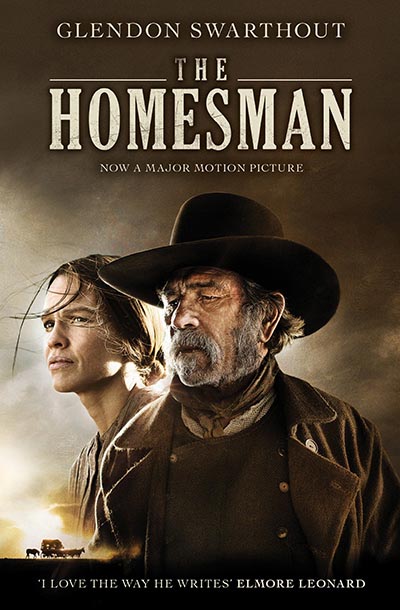 Homesman is certainly no Little House on the Prairie. Gwendon Swarthout’s novel, transformed to screenplay by Tommy Lee Jones, Kieran Fitzgerald, and Wesley A. Oliver, is a spare and harsh tale of a middle-aged spinster, a former New York State school teacher, Mary Bee Cuddy, (Hillary Swank) who headed west for opportunity, and ended up farming alone, singing to music she pretends to play on a keyboard tapestry.

She’s too plain and independent for any man to accept her marriage proposals. But the married women fare no better. These brides, brought from the east to Nebraska, fall into madness from the harshness of pioneer life, and pious Mary Bee, feeling near madness herself at times from desperation, takes it upon herself to drive them to a church in Ohio that takes care of the mentally ill. (Guess there were no asylums on the frontier.)

Before long, she saves a drifter and claim jumper, George Brings (Tommy Lee Jones) from hanging and coerces him into going with her. One of the madwomen looks eerily like Meryl Streep. Voila, she is Meryl Streep’s daughter, Grace Gummer.

This is the sort of film that great actors who are enamored with their craft, such as James Spader and Meryl Streep, are willing to take tiny roles in just to be a part of it.

Tommy Lee Jones not only co-starred, but directed this film, and what a performance he got from Hillary Swank, and from himself, too.