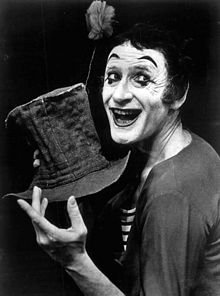 I was lucky enough to see the French actor and brilliant mimist, Marcel Marceau, perform many times on TV and once live at the Tilles Center in Westbury, Long Island. What I never knew until my sister , Nannette, sent me this article was that he was also a hero who saved Jewish childrens’ lives during the Holocaust.
“Marcel Marceau’s extraordinary talent for pantomime entertained audiences around the world for over sixty years. It also saved hundreds of Jewish children during the Holocaust.
Born to a Jewish family in Strasbourg, France in 1923, young Marcel Mangel discovered Charlie Chaplin at age five and became an avid fan. He entertained his friends with Chaplin imitations, and dreamed of starring in silent movies.When Marcel was 16, the Nazis marched into France, and the Jews of Strasbourg – near the German border – had to flee for their lives. Marcel changed his last name to Marceau to avoid being identified as Jewish, and joined the French resistance movement.

Masquerading as a boy scout, Marcel evacuated a Jewish orphanage in eastern France. He told the children he was taking them on a vacation in the Alps, and led them to safety in Switzerland. Marcel made the perilous journey three times, saving hundreds of Jewish orphans.

He was able to avoid detection by entertaining the children with silent pantomime.

Documentary filmmaker Phillipe Mora, whose father fought alongside Marcel in the French resistance, said, ”Marceau started miming to keep children quiet as they were escaping. It had nothing to do with show business. He was miming for his life.’’

Marcel’s father perished at Auschwitz. Marcel later said, “The people who came back from the camps were never able to talk about it. My name is Mangel. I am Jewish. Perhaps that, unconsciously, contributed towards my choice of silence.”

While fighting with the French resistance, Marcel ran into a unit of German soldiers. Thinking fast, he mimicked the advance of a large French force, and the German soldiers retreated.

Word spread throughout the Allied forces of Marcel’s remarkable talent as a mime. In his first major performance, Marcel entertained 3,000 US troops after the liberation of Paris in August 1944. Later in life, he expressed great pride that his first review was in the US Army newspaper, Stars and Stripes.

In 1947, Marcel created his beloved character Bip, a childlike everyman with a stovepipe hat and a red carnation. For the next six decades, Marcel was the world’s foremost master of the art of silence. Pop star Michael Jackson credited Marcel with inspiring his famous moonwalk.

In 2001, Marcel was awarded the Wallenberg Medal for his acts of courage during the Holocaust. When the award was announced, people speculated on whether Marcel would give an acceptance speech. He replied, “Never get a mime talking, because he won’t stop.”

Until his death at age 84, Marcel performed 300 times a year and taught 4 hours a day at his pantomime school in Paris. He died on Yom Kippur, 2007.

For risking his life to save orphans, and entertaining generations of fans without uttering a word, we honor Marcel Marceau as this week’s Thursday Hero at Accidental Talmudist.

With thanks to Essia Cartoon-Fredman