The trailers didn’t do this film justice. The three brilliant NASA scientists who helped launch John Glenn into space, overcoming the hurdles of being women and being black, are finally given their due.  The previews made the film 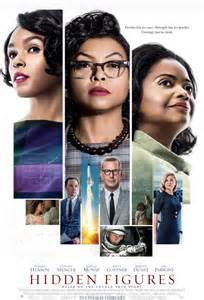 look sentimental and slapstick. I had no idea that I was going to be so moved, informed, and thrilled. I wish I had known about Katherine G. Johnson before I saw Obama give her a Presidential Medal of Freedom. She was 97 and in a wheelchair. But I forgive myself for not knowing about these women before. After all, they were HIDDEN.