HEMMING FLAMES by Patricia Colleen Murphy, winner of the May Swenson poetry prize, 2016 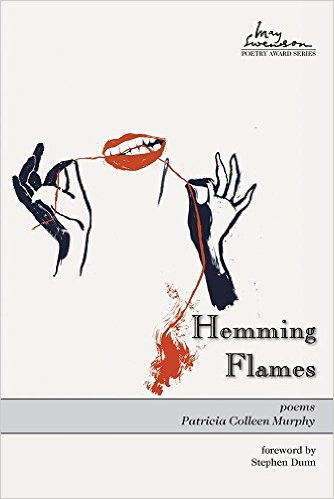 A review by Rochelle Jewel Shapiro:

On my foyer wall is a signed litho of May Swenson’s Come In Go Out. I have all her books on my shelves, including a signed collection. So when I read that Patricia Colleen Murphy won the University of Colorado’s 2016 May Swenson Award, I just had to read it.

I had expected Murray’s work to have the same playful tone and subject matter that Swenson aimed for. Instead Murray’s Hemming Flames is dark, haunting, yet full of wordplay, and irony. It’s as if the spirits of Plath and Swenson whispered in her ears, while Eliot, Sexton, and all the other greats waited in line for their chance to add to the inspirational susurrus.

Murphy has the magic of opening the groaning door to the chamber of horrors of her God-awful childhood by letting you into how it felt rather than spelling out, or spilling out, every detail. How does she manage it? Through surreal images and dreams. In My Brother Hoarding, instead of listing all he’s hoarding, she comes up with this:

Now he wants wooden gloves
with ornate carving of egrets

She shows us the impossibility of her brother actually filling his wants and perhaps suggesting a feminine side to his nature? Dreams fit so smoothly into her poems that even the reader isn’t sure whether he is awake or asleep. In Midnight at Orca Cannery, Murphy goes from kayaking in Prince William Sound to this:

Later in the cannery dorm
white walls and mattress

I wake sculling the ceiling
The water still mounts me.

She also leaps in time in such original ways as she did in How the Body Moves. It begins with her in a photo as a little girl on her porch with her Siamese cat, which brings up a devastating memory. Then she leaps to:

Only twenty more miles.
I am 15. My uncle is driving.

She takes us to far flung places from Ohio to a mental institutions in Russia, to Korea and Katmandu, which fits her restlessness and fills the hunger of a reader for adventure.

The lines of her poems are so biting, so surprising, that you often feel sucker-punched. I don’t want to give examples, because it not only spoil your reading of the poems, but also reveal too much of this novelistic collection. This harrowing tale of a bipolar mother who sets fires, a father so drunk that the child has to take his car keys from him, a brother who masturbates in front of his sister, and the ongoing effects all of this has on the poet.

Pulitzer Prize winner, Stephen Dunn wrote in the forward that the title of the book doesn’t become clear until the last poem, the title poem—Hemming Fires—“as if the act of writing itself is an attempt to hem what can’t easily be hemmed.”

Hemming Flames is accessible, but written with remarkable power and sophistication. Anyone will get so much out of it, but for me, Patricia Colleen Murray is a poet’s poet.